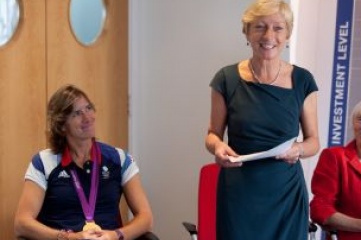 Despite the growing role of women in sports administration, media coverage has yet to unlock the huge potential of women’s sports, says Liz Nicholl of UK Sport

HOST CITY: How has the influence of women on sports administration developed throughout your career?

Liz Nicholl: I have held positions at national level in sport for over 30 years, and when I started out the industry was male-dominated and the voice of women in sport was rarely heard.

My breakthrough came as a young CEO of England Netball in the 1980s; my national leadership role placed me in an environment where I was able to see that I was just as good as the majority of individuals in similar, significant roles. I gained confidence from colleagues and I now say to others “Don’t hold yourself back. If someone you respect thinks you can do it, you can!”

Over the years I have seen some progress but it’s been slow. The need for diversity in leadership is now much more widely accepted in business. Change is happening in sport but it is slower and held back by tradition.

At a government level, ministers are more outspoken on equality matters and more people are listening. This national profile and debate is ensuring that the momentum is increasing but there is still a long way to go.

There are now more role models and more signs of change. Baroness Sue Campbell was Chair of UK Sport for over 10 years and now across the five UK, England, Scotland, Wales and Northern Ireland government agencies for sport, four or the five CEOs are women.

Liz Nicholl: When I look across the cohort of CEOs and chairs of National Federations of sport, there are a relatively small number of women – but we are seeing a shift at board level.

There is an expectation placed on funded sports by UK Sport and Sport England that all sport boards should be made up of at least 25 per cent women by 2017. Currently over 90 per cent of the sports we fund have women Board members and the UK Sport Board is made up of 40 per cent women.

HOST CITY: What still needs to be done to make further progress?

Liz Nicholl: We need more women in coaching generally and especially at a high performance level. We are looking into what some of the barriers might be while at the same time providing and a programme to support athletes, with an emphasis on women athletes, transitioning into coaching.

The biggest challenge is the limited media coverage of women’s sport. Better, balanced media coverage would unlock enormous potential and sponsorship and could massively increase the momentum for positive change. We will be hosting the Women’s Hockey World Cup in 2018 and have ambitions for other events to shine the media light more specifically on women in sport.

Personally, as a woman working in an influential role within British sport, I know there is more I could be doing to keep this issue visible and to challenge where I see inappropriate inequalities and I am determined to do so.

Liz Nicholl OBE is the Chief Executive of UK Sport. To read the full interview, register to receive the next issue of HOST CITY magazine