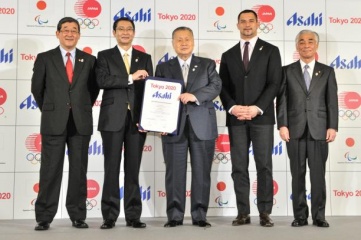 Nippon Telegraph and Telephone (NTT) Corporation and Asahi Breweries have both signed as gold partners of the Tokyo 2020 Olympic and Paralympic Games, within the space of two days.

NTT Corporation will provide telecommunications services for hosting the Games.

On Tuesday, Asahi Breweries was announced as the second Gold Partner in the “Beer & Wine” category.

"NTT has a long and distinguished history of connecting people across the length and breadth of Japan, and it is my earnest wish that we will be able to work together to further strengthen bonds between people and ensure that we deliver a successful Olympic and Paralympic Games in 2020," said Tokyo 2020 President Yoshirō Mori.

In today’s world, security is a major function of the telecommunications partner.

“With the rapid evolution of ICT (information and communications technology), the Tokyo 2020 Olympics and Paralympics require telecommunications convenience to be accompanied by safety more than ever before," NTT said in a statement.

"In addition to helping make the Games' telecommunications safe, secure, and welcoming, NTT is taking advantage of the Group's telecommunications related security technologies and its telecommunications service infrastructure inside and outside Japan, endeavouring to act as a 'value partner' in providing an unprecedented level of hospitality to the Tokyo 2020 and other relevant organisations, as well as competitors and guests from Japan and overseas."

The second Gold Partner to sign, Asahi Breweries, is already a Gold Partner of the Japanese Olympic Committee.

“As becoming the Tokyo 2020 Gold Partner (Beer & Wine), we are greatly looking forward to support not just the Japanese national team, but also every single athlete competing in the Games, allowing them to perform beyond their limits, and convey the message of the magnificence of having hopes and dreams to the children who bear the future,” said Akiyoshi Koji, president of Asahi Breweries.

“Asahi Breweries has an excellent slogan, which translates roughly as ‘Let’s share the emotion,’” said Mori.

“This slogan very much echoes the efforts of the Tokyo 2020 Organising Committee to support athletes in their endeavours and to provide a stage where that emotion can be shared.

“During the Games, the whole of Japan will be raising their glasses and cheering on the athletes, and we are looking forward to working closely with Asahi Breweries to share the emotion of the Tokyo 2020 Games.”

The domestic sponsors of the organising committee are distinct from the International Olympic Committee’s global TOP sponsorship programme, which also makes a major contribution to hosting the Games while supporting the Olympic movement worldwide and includes Japanese companies Bridgestone and Panasonic.