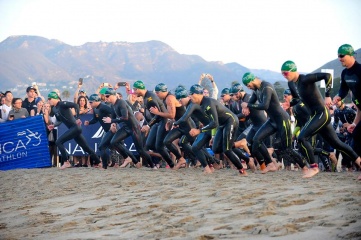 Super League Triathlon is set to establish itself in the USA with the acquisition of the Malibu Triathlon.

The prestigious event has welcomed world class athletes as well as Hollywood stars such as Matthew McConaughey and Zac Efron during its long and illustrious history and secures Super League Triathlon a significant entry into the US market.

Malibu Triathlon will remain under its own branding and will also continue to support Children’s Hospital Los Angeles (CHLA), having raised more than $15m for the cause. Further announcements on Super League’s exciting plans for the event will be announced in early 2021.

“Acquiring the Malibu Triathlon is a perfect opportunity for Super League to move into the USA and build our presence in a region that already has a strong affinity with our exciting and dynamic racing and the content that we offer. It also aligns with our wider strategy to add more major cities and regions to our portfolio.

“We would like to thank Michael Epstein and his team who have worked so hard down the years to build and enhance the event, as well as previous owners Motiv.

“The prospect of Super League being involved with such an iconic race is very exciting.”

The Malibu Triathlon was first held in 1986 and retains a special place in the sport’s history.

The event starts and finishes on the sands of Zuma Beach and takes in the incredible ocean views of the Pacific Coast Highway.

This year’s event was replaced by the Virtual Triathlon and Duathlon Presented By Bank Of America. More than 700 participants from around the world took part raising $200,000 for Pediatric Cancer Research at CHLA.

Malibu Triathlon is a favourite of the film and entertainment industry with the likes of Tom Cruise, James Marsden and Jennifer Lopez having taken part.