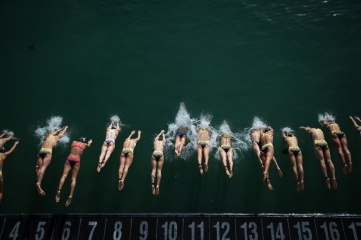 Super League Triathlon (SLT) is gearing up for the start of its 2019 Championship Series as the eyes of the multisport world turn to Jersey.

The Channel Island is one of the original SLT venues and has been further improved for this year’s event on September 28-29 to deliver one of triathlon’s most thrilling race weekends that will be watched around the globe.

Super League has reinvented the swim-bike-run format to produce short, sharp and hugely engaging races that are made for broadcast and a modern-day global sporting audience.

Jersey and SLT have formed a winning partnership as part of Super League’s ongoing collaborative efforts to recognise the uniqueness of all venues and provide value to the wider community who buy into the hosting.

It all starts with a desire to be part of the community, ensuring there is not widespread disruption to the host city and creating an amphitheatre feel around an 800-metre loop, so spectators are up close and personal with the action.

Also key to Jersey or any host city is a guarantee of world’s best athletes who are committed to not only achieving their sporting potential but also engaging in Super League’s extensive outreach programme.

The athletes spend the days building up to the weekend of racing in local schools and communities, providing role models to inspire health and wellness, social integration and diversity, and when the event goes live Jersey is seen across the world as a lifestyle destination.

And that’s all before you consider a few of the numbers. Nielsen Sports report that a Super League race is picked up by 104 broadcasters reaching 1.16 billion households with a media value of nearly £14 million.

There has also been huge growth in Super League’s digital footprint with an expectation that global reach from an event will grow to 42 million in 2019.

Super League remains focussed on delivering direct economic benefits to a host city – with Jersey estimated at around £1m last year – while also providing the intangible advantages that come via being associated with a globally recognised and game changing sports brand that aims to fit seamlessly into the local community and its culture.

Super League Triathlon has 2019 races planned in Jersey on September 28-29 and Malta on October 19-20. For more information visit superleaguetriathlon.com

Michael D’Hulst, CEO of Super League Triathlon, is speaking at Host City 2019 in Glasgow on 26-27 November, under the conference theme “Innovate; Reformulate; Co-create”