Staying in the game: how IFs are surviving the Covid crisis - Host City News

Home
»
News
»
Staying in the game: how IFs are surviving the Covid crisis 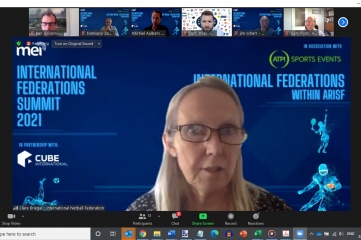 Make no mistake, the rights holders of international events are in the middle of a fight for survival.

“We’ve faced major disruption to our events and are revising our international calendar,” said Jim Scherr, CEO of World Lacrosse. “We’re hoping to get thought this immediate Covid crisis but it’s going to change the world forever, the way we govern and administer sports.

“This is going to affect all of us for probably the rest of our careers.”

When the going gets tough, the tough get going – and the IFs, IOC, event hosts and national governments have all played their part.

“The Swiss government were quick to put in place tools supporting the international federations. The IOC brokered the position of the IFs very well, so they made partial unemployment for personnel available. There were also funds available from Swiss banks at favourable interest rates.

“We set up several working groups: one dealing with promoters who have main responsibility of organising and hosting the events; and another organising disciplines where we do not have a promoter – working with cities and local clubs.

“For commercial partners with difficulties, we reached ad hoc agreements with them.

“Despite a consistent loss, as everybody, with the support of Swiss government and with cost containment we were able to break even at the end of the year and be a bit more confident facing 2021.”

Event cancellation and postponement creates issues that reach beyond the immediate impact of lost ticket sales.

“We took a set of financial actions in order to cancel the cancellation fees for the rider licenses,” said Zamana. “We were able to keep almost 80 per cent of the Junior Series going, which was important to avoid the ‘Covid gap’ for young athletes. If you are six to eight years old, you cannot be an elite athlete so you can’t train.”

Risk too much to bear

The INF’s junior events were not as fortunate as its World Cup, which took place in 2019 and is due to place again in 2023.

“The Covid gap is a key consideration,” said Briegal. “We took the decision with a heavy heart to cancel our under 21s, as it’s a key pathway event. By the time we get to ‘23 and ‘27 there will be athletes that won’t have had that experience.

“Our approach was to protect the senior events which are more critical for our member countries and where we get most of our exposure and income. That has to be protected, the qualifiers have to be protected – the risk of staging the under 21s was just too much to bear for us.”

2021 remains a year of uncertainty for event organisers. “Some federations have decided not to run events this year. We are one of the federations who hope to run two events this year,” said Joern Verleger, President, International Fistball Association. “We are crossing our fingers and preparing. Let’s see how these things develop.”

Throughout the crisis, the federations have supported their members and communities.

“One of our challenges was to help our national governing bodies return to play. We formed a task force with our chief medical officer,” said Scherr.

“We scuttled about a third of a budget – then reallocated funds to our national members so they could stay in business.”

The INF worked with NETFIT and its members all over the world to provide online coaching, including coaching sessions for young people in Liberia. “When there’s no international netball what are we there for? To keep the international family together,” said Briegal.

“And if you want to think about the power of fans, think about what happened in UK and Italy around the European Super League. The fans are very much still there. We need to capture and amplify this.”

The event supply chain has also been massively hit by the crisis, affecting some sports more than others.

“Our sport depends on suppliers – you need a motorcycle!” said Zamana.

Despite Covid, motorcycle sales were up 13 per cent last year – but not everyone has been able to access the equipment they need.

“In Australia, if you need to order a motorcycle the production and distribution time has become so stretched you have to wait four years. Fortunately this is not the situation in Europe, which is closer to the source of production.

“This is having an impact, so we need to modify our planning. The plants are back to normal production and we hope that this gap will be absorbed completely within 24 months.”

On a different scale, fistball also requires specialist equipment. “The ball is very important, and so is our relationship with sport equipment manufacturers,” said Verleger. “We’re interested to establish more connection with service providers.”

Like all organisations, the IFs have faced governance challenges, with closed offices, remote workers and virtual congresses. “We’re a very friendly sport, used to meeting to celebrate the sport,” said Briegal. “The challenge is how to make these online conferences enjoyable for delegates!”

Scherr said “We had to do a complete pivot, all of a sudden working remotely. We worked hard to make sure we all have the same connectivity, moving to cloud storage – and then making sure volunteers had the same. We settled on zoom for external and teams on internal for functionality and privacy. Our biggest concern is that now people are using their own hardware, how do we manage GDPR?

“We are trying to aggressively build digital and social media following for the sport on the back of our events.”

Digitalisation has proved less of a barrier to World Obstacle, whose globally disparate membership has meeting virtually for years. “We have General Assemblies by Zoom since 2015, so we are used to having these kinds of meetings,” said Michel Cutait, deputy Secretary General of World Obstacle (FISO).

“It suits our structure – we have a committed team, a young federation, but we are very connected with young people and we think we have a great future. We have ambitious plans for our World Series and World Championships involving AR and VR, partnering with technology companies – and a very natural location for broadcasting and streaming.”

No matter how dark the climate is right now, the future is surely much brighter in comparison.

“The vaccination is going on with different results in different areas of the world – moving on quite well in Middle East, UK, and US, but slow in other parts of Europe,” said Zamana. “I hope the vaccination will continue with speed to give us a bit more freedom of movement while respecting the protocol.”

The progress of protection against the virus impacts how long it takes federations to recover.

“It depends on how 2022 will go,” said Zamana. “We’re already switching to our ‘plan B’ budget for this year.

“If for 2022 we go back to 100% of activity, we’ll recover in 5-8 years to where we were before, in terms of investment, sports developments, junior development and commitment to antidoping.”

Access to insurance is an issue for all event organisers. “The majority of IFs don’t have shareholders; they are not for profit. I’m struggling to renew a simple insurance policy – they are asking for a lot of financial information, because the insurance companies are not willing to take a risk on a small federation. We ask the insurance industry to support us: I understand the concerns, but please understand who have in front of you – we are not Nestle or Novartis!”

Scherr said “We have to navigate the world of liability – to manage the risk to the athletes, the spectators. What we do know is there is still demand from the public to consume sport. We need to work together to face this new world.”

A quick rebound is possible, said Briegal, responding to a question from Andy Bough of Cube International. “There’s a lot of pent up money. Licensing and merchandising are important to us, after ticketing and broadcasting. It’s a big growing area – a lot of our fans love to shop.”

Major events don’t always make the most of this retail opportunity, she said. “Organising committees have been conservative about the investment they are prepared to make up front and, in all cases, we’ve sold out in two days.

“Let’s hope the 2022 Commonwealth Games is a good retail opportunity. We encourage organising committee to look at the commercial opportunities of merchandise. I’m very positive – I think there’s demand out there.”

Even when events can’t take place, retail is an important source of income for federations. “If they can’t go to events, people want to demonstrate support for their teams in other ways. International fans can’t go to the Olympic Games, so how are people going to celebrate? In fan sites in their own countries. There are always opportunities.”

A challenge the sector faces is uncertainty around the recovery of international tourism. “You’ve got to make people feel comfortable travelling – it’s a big problem we’re going to have to solve together,” said Briegal.

“The big challenge for the sports world will be availability – a lot of the airlines have downscaled on flights and staff. We want to find connections to your event from airlines.”

Get with the Olympic programme

Looking further in the future, Los Angeles is hosting the 2028 Olympic and Paralympic Games. Could lacrosse, which originated in North America from indigenous peoples, be part of the programme?

“We hope we have an opportunity to join LA28. It’s been in five Olympic games,” said Scherr, who was CEO of the US Olympic Committee from 2003 to 2009. “Given the sports selection process we think there’s an opportunity. There’s a tremendous amount of competition, but we think it would great for the LA28 Games. It certainly should be a great game changer for the sport of lacrosse around the world.

“LA28 have almost all their venues built already, or existing venues. There’s quite a bit of overlay to do. It’s a great Games, they’ve announced two founding partners on the sponsorship side, it’s an interesting proposition. The IOC Agenda 2020+5 and the question of cost and complexity of the Games might change how all federations fit into the Games.

“We’re looking forward to a fantastic Games in LA in 28 and hope we can be part of it.”