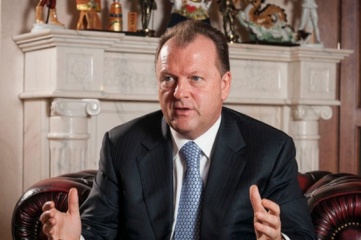 Marius Vizer, president of SportAccord, has attacked the IOC’s Agenda 2020 programme of reform, saying it is not in the interests of sport

Marius Vizer, the president of SportAccord, the umbrella group of international sports federations, has directly criticised IOC president Thomas Bach and his programme of reform, Agenda 2020.

Agenda 2020 was unanimously approved by IOC members in December 2014, but Vizer said the reforms are not in the interests of sports and international federations.

He criticized the IOC’s decision to launch the new Olympic TV channel, which he said was taken without consultation or transparency.

Speaking at SportAccord Convention in Sochi on Monday, Vizer also complained that the IOC is preventing the launch of new multi-sports Games event.

“After becoming SportAccord President, I always tried to develop a constructive collaboration with the IOC and with President Bach. A collaboration based on respect towards the Olympic Movement, its members and the values in which I believe. Unfortunately, it never became reality,” Vizer said.

“I made a number of proposals in favour and for the benefit of IFs and SportAccord but we have never received a positive reaction. Mr. President, stop blocking the SportAccord strategy in its mission to identify and organize conventions and multi-sport games.

“Do not try to create a theory around which sports are and are not eligible for multi-sport games. Do not try to impose upon the organizers of SportAccord events guidelines on how to distribute funds generated and earned by ourselves. Do not interfere in the autonomy of the sport organizations.”

The primary feature of Agenda 2020 is its reform of the bidding procedure for Olympic Games, which has been changed to reduce the cost of bidding to make it more appealing to cities.

One of the changes brought in was to prevent bidding cities from presenting at SportAccord Convention. “The voting for potential host cities of the Olympic Games is compromised,” said Vizer.

“Key stakeholders are excluded from making informed decisions when selecting Olympic host cities: the bid cities cannot present their candidatures at SportAccord Convention to all stakeholders, IOC members cannot visit bid cities and during the IOC Session, when the vote takes place, IF presidents – who are organizers of the Olympic Games, are obliged to leave the room.”

Vizer said the interests of the international federations (IFs), which SportAccord represents, were not properly addressed.

“The Agenda 2020 hardly brings any real benefit to sport, to IFs, or athletes. It did not bring about more clear criteria, rules and principles,” he said.

Vizer singled out recommendations 9 and 10 of Agenda 2020 as leading to “a destabilizing of the Olympic sports”.

Recommendation 9 manages the scale of the Summer Olympic Games by limiting accreditations to 10,500 athletes competing in 310 events, and the winter Games to 2,900 athletes and 100 events.

Recommendation 10 sets out to structure the Olympic programme around events rather than sports. The IFs are to be involved in regular reviews of the programme and organising committees will be able to suggest adding one or more sports to the programme, but the IOC retains ultimate decision making power over which sports and IFs to include in the programme.

He also described recommendation 19, to launch an Olympic TV channel as “very surprising”.

“The IOC Members voted in December 2014, in the IOC Session, unilaterally, without a clear business plan, a commercialization plan and project, to reduce the dividends to International Federations in order to establish the Olympic channel. Leaving from the premise that the Olympic Movement has the assets, any business project in the world needs a business plan, investors, professional partners, breakeven points, strategy, consultation with stakeholders – International Federations and to generate a benefit for all stakeholders. Only after the decision it appears that a plan is in process.

“At the same time, the cost of more than 450 million dollars to establish a digital channel seems exaggerated. Do consult us as stakeholders of the Olympic Movement regarding all the proposals, contracts and partnerships that are being signed and make them transparent!”

Read the full transcript of the speech here.