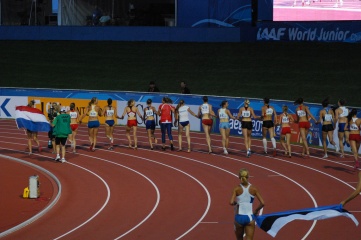 SportAccord Convention announced today that the International Association of Athletics Federations (IAAF) had signed up as a Bronze Partner for this year’s World Sport & Business Summit taking place from 19-24 April 2015 at the Sochi Expocentre, Russia

SportAccord Convention announced today that the International Association of Athletics Federations (IAAF) had signed up as a Bronze Partner for this year’s World Sport & Business Summit taking place from 19-24 April 2015 at the Sochi Expocentre, Russia.

As part of its sponsorship, the IAAF will be holding a live Kids’ Athletics demonstration on Tuesday, 21st April (12:00-14:00hrs) in front of the Expocentre. Created in 2005, Kids’ Athletics is a worldwide sports development programme with the mission to make Athletics the number one physical activity in schools, and since 2012 has been partnered by “Nestlé Healthy Kids”.

“The IAAF is thrilled to be a Bronze Partner for this year’s SportAccord Convention. This is an exciting time for Athletics, the number one Olympic sport, and there is no better opportunity in 2015 to showcase our flagship school/youth programme to leading figures in the world of sport,” said Nick Davies, IAAF Deputy General Secretary and Communications Director.

IAAF / Nestlé Kids’ Athletics, which has now been rolled out to over 130 countries, aims to introduce young people to sport and educate them in a fun way about the lifelong benefits of physical activity.

A year ahead of the Rio Olympic Games and, with the IAAF World Championships, Beijing 2015 taking place in the world famous Bird’s Nest stadium from 22 to 30 August, Athletics is in the spotlight. The IAAF is eager to take that opportunity to showcase its inspiring youth development programme to the world.

Commenting on the Partnership, Nis Hatt, Managing Director, SportAccord Convention said: "The Sports Demo Zone is an integral part of the SportAccord Convention and having the support and involvement of the IAAF is significant, as we continue to promote and educate both the youth, and indeed adults, about the benefits of physical activity for health and well-being.”

As part of its Bronze Partner status, the IAAF will also be sponsoring the daily morning runs. On Wednesday, 22nd April, Kipketer and Borzakovskiy will be offering a fortunate group of runners the opportunity to take in the sights by leading them on a short run around the Olympic Park. The aim of the sponsorship is to show that the IAAF is not only about elite performance sport but has a huge role to play to encourage physical activity amongst the wider public.

The International Association of Athletics (IAAF) created in 1912 is the world governing and rule making body for Athletics, the Olympics number one sport. Today the IAAF encompasses track and field, race walking, road, cross country and mountain running. Boasting 213 national Member Federations, it has a global reach greater than that of the United Nations. The biennial IAAF World Championships, whose nine days of competition attract 2000 athletes from over 200 countries and are broadcast to an accumulated 6 billion TV audience worldwide, are the world’s third largest sporting event after the Olympic Games and football’s World Cup.

For further details about the SportAccordConvention World Sport & Business Summit, or to register as a delgate, visit www.sportaccordconvention.com.