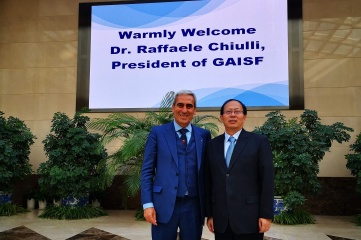 Beijing will become only the second city, after Lausanne in Switzerland, to have welcomed back SportAccord for a second time

[Source: SportAccord] Raffaele Chiulli, the President of SportAccord and the Global Association of International Sports Federations (GAISF), has hailed preparations for the SportAccord World Sport & Business Summit 2020 on a visit to the event’s host city of Beijing, China.

Chiulli said: “After being briefed on the impressive preparations by various stakeholders, we have been left in no doubt that plans are on track to deliver a truly memorable SportAccord next year. With six months to go, this trip has given us the ideal opportunity to gauge the level of excitement that is building ahead of what promises to be an unmissable event.”

Beijing will become only the second city, after Lausanne in Switzerland, to have welcomed back SportAccord for a second time, having staged the 2007 edition of sport’s most influential annual gathering a year before the city hosted the 2008 Summer Olympic and Paralympic Games.

With Beijing set to become the first city to have hosted the Summer and Winter Olympic and Paralympic Games in 2022, when the Winter multi-sport showcase arrives in the Chinese capital, SportAccord 2020 will provide a timely signpost for the international sporting community.

Chiulli added: “The organisers and supporters of the SportAccord World Sport & Business Summit 2020 have made no secret of the fact that the event is part of the long-term strategy of Beijing and China at large to promote and accelerate sports development. In our meeting with Minister of the State General Administration of Sports and President of the Chinese Olympic Committee Gou Zhongwen, we spoke at length about the positive role SportAccord can play in driving further progress in sport within China and worldwide.”

On a similar note, the Summit conference programme at SportAccord 2020 will focus on the theme of ‘Breaking Down Barriers in the Ever-Expanding World of Sport’, offering organisations that are seeking to expand their footprint in Asia a chance to learn from the sector’s most influential figures.

Numerous big-name speakers from the host country are being lined up to provide insights on the Summit conference programme, including John Sun, the CEO of Alibaba Group-owned AGTech.

Attending SportAccord enables delegates to network with sporting leaders at the highest levels, access an extensive conference programme and experience the many opportunities on offer in one location at the world’s leading global sports business event.

Organisations can become an official partner or exhibitor and discuss these investment opportunities with sales@sportaccord.sport.