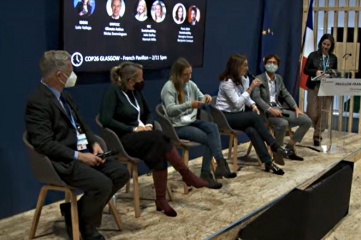 Host City reports on how the Olympic movement is showing climate leadership at COP26 in Glasgow, Scotland

Representatives of the United Nations, the International Olympic Committee (IOC) and the Paris 2024 Organising Committee of the Olympic and Paralympic Games spoke out at COP26 in Glasgow to highlight sport's capacity for action on climate change.

The speakers are all involved in the Sports for Climate Action Framework, which was launched at COP24 Katowice in 2018 as a collaboration between the United Nations Framework Convention on Climate Change (UNFCCC) and sports organisations from all over the world.

The aims are dual: firstly to get the sports sector to move together towards a climate neutral world, and secondly to use its enormous reach to educate, inspire and raise awareness for climate action.

“Sport has a big climate footprint,” Niclas Svenningsen, Manager for the Global Climate Action team at UNFCCC told delegates at COP26 in Glasgow.

But sport also has a huge power to influence. “Not everyone might have a favourite politician, but everyone has a favourite athlete or club,” he pointed out.

Since its launch, the Sports for Climate Action Framework has grown to encompass 300 sports organisations including IOC, FIFA, Paris 2024 and many others. As one of the first sectoral partnerships, the sports framework has also led the way for other sectors to follow suit.

“We want to promote sustainable consumption and advocate more climate action towards athletes, fans, suppliers and everyone else.”

“Almost everyone says we have to do this,” said Svenningsen.

One of the first organisations to get involved in Sports for Climate Action with the UNFCCC was the IOC.

Julie Duffus, Sustainability Senior Manager at the IOC confirmed that the organisation is on track with these goals. And in addition to the UNFCCC targets, the IOC has added an interim goal of reducing the carbon footprint of the Games by 30% by 2024, beyond which all future Games will have to be climate positive.

When it “walks the talk” on climate change, sports can use its power to influence others to change.

“We have such an opportunity to reach so many people,” Duffus said. “We also work with the Olympic movement – international federations, National Olympic Committees and Organising Committees – to reduce their carbon footprint and to use their agency to reach people.

“The athletes are great advocates to reach so many people. If we can give them a voice, we can reach a lot more people to take action individually and within their communities.”

Engaging everyone on earth

Hannah Mills MBE, the most successful female Olympic sailor of all time, is a sustainability ambassador for IOC. Her interest in sustainability began at Rio 2016 where she saw the scale of the problem of plastic pollution.

“What I’m really passionate about is using my voice, but also encouraging other athletes to lend their voice to these massive challenges,” she said.

“Nothing brings people together as much as sport or the Olympic Games does. It’s an amazing coming together of the human race in one place.

“I’m here to say to the politicians: Tokyo delivered a Games that no one that no one thought would happen – now it’s over to you to lead and deliver for us at COP26.

“We need every single person on earth to be engaged with it and doing their bit.”

“Everyone here is really committed to giving sport the platform and the opportunity to put forward the agenda for climate change and the sustainable development goals.

“Athletes have a key role. I appreciate we have a footprint as well, through sports events. But sport has a positive impact in so many areas and if we can harness that, then we stand a really good chance of tackling this crisis in the way that we need to.”

As Director of Sustainability at the Paris 2024 Organising Committee of the Olympic and Paralympic Games, Georgina Grenon is responsible for achieving climate action.

“The Olympic and Paralympic Games is the biggest event in the world, and we are facing mankind’s biggest challenge.

“We couldn’t stage the Games like we used to. That’s why we’re fully aligned with the Paris agreement, to be the first Games to leave a positive impact on the environment.

“It is not easy. This is a race we have to win, and this is where athletes inspire us. We all have to become climate athletes, to be inspired by their resilience, to be objective and to go beyond what was done before.”

The carbon footprint of previous Summer Olympic Games has been estimated to be around 3.5m tons of CO2. The biggest component of this is travel, followed by construction, and then operations.

Using guidelines from the IOC, the Paris 2024 organisers have assessed the carbon footprint of their Games to be 1.5m tonnes of CO2. This major reduction is being achieved using 100% renewable energy, by building in a more efficient way, and by using existing buildings.

“This is how you start slashing emissions in a pragmatic way. It takes team spirit with international organisations like the IOC and all our suppliers to make this happen,” says Grenon.

“We are trying to progress in our way and want to get all of you in Paris in 2024 to celebrate this win as well.”

Hannah Mills highlighted another important responsibility of athletes and sports organisations – their affiliation with brands.

“As an athlete what’s not talked about enough is sponsorship in sport – who athletes choose to partner with and the messages they send.

“We have audiences, including young people who are influenced. We want to send positive messages from brands who want to do the right thing.

“Sport events have the ability showcase many solutions that wouldn’t have the platform otherwise.

“We can give sponsors the opportunity to show their best in these sport events,” Grenon added. “Most of the solutions are not there and we can’t bring them up on our own.”

“Sport has to come together with academia to find these solutions,” said Duffus. “It’s only by working together that we are going to solve this crisis.”

As well as decarbonising, Paris 2024 is also working across all 17 UN Sustainable Development goals “The social aspects are extremely important,” said Grenon. “This is how you build a sustainable legacy for the Games.”

The Olympic movement might be ahead of some sectors in decarbonisation, but there is still no time to lose.

“We have known about climate change for 100 years. We have to change now,” said Svenningsen.

“Sports is such an important part of raising awareness – it’s like the oil in the machinery. I’m positive we are going to reach a goal.”

To find out more from UNFCCC, IOC, Paris 2024 and how events can contribute to the environmental bottom line, register now for Host City 2021, taking place online from Glasgow on 7-8 December