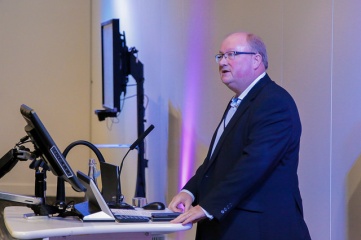 Paul Bush OBE, Director of Events at VisitScotland and Chairman of Host City 2017

In his opening address to Host City 2017, Paul Bush OBE highlighted the “woeful” landscape of world sporting events today and the need to focus on creating positive impacts

I’d like to welcome you all to Glasgow and Scotland for Host City 2017.

This is the third consecutive year that Host City has been held in Glasgow and I am delighted to see how it has grown.

EventScotland has a strong heritage with this conference and, with so much happening in Scotland over the coming years; it is fitting to have so many of the world’s foremost event practitioners meeting in this great city ready to discuss high-impact events

Having spent the last few weeks at home recovering from a new hip I have had lots of time to think, reflect and cogitate about the world sporting events landscape.

Unfortunately, several key words and phrases have stood out on more than one occasion:

to name but a few.

I find all of this very sad and, whilst it may well be a reflection of where we are, the lack of positive dialogue in terms of what high impact events can achieve is woeful.

Whilst we have many challenges I genuinely believe that we need to celebrate success much more and ensure that we articulate and communicate to the public, politicians, media and more importantly athletes and fans how important this sector is for the world’s economy.

Take this city, Glasgow. On the back of the 2014 Commonwealth Games, the Hydro entertainment venue is ranked second or third in the world and the local vicinity is a contemporary and vibrant place to work, live and play, supporting 2,500 new jobs with some of the finest restaurants and cafes in Scotland.

I hope that the next two days gives us all the opportunity to both share our wisdom, and also reinvigorate and celebrate all that is great about our global events industry – one that, if we are not careful, is in my view at risk.

We need to articulate the special DNA of High Impact Events:

Thank you for coming to Scotland and enjoy the conference. I am delighted to announce that we are working with Host City to further grow the event in Glasgow and Scotland next year and see this city as future the home of a world class conference for global event cities and events.

Thank you and enjoy the two days.

Paul Bush OBE is VisitScotland’s Director of Events, leading the EventScotland Team, Business Events and Industry Development.  EventScotland takes a strategic lead in the Scottish events industry and is responsible for working with partners to attract, bid for and secure major sporting, cultural and business events.

Over the past decade this has brought some of the world’s biggest event properties to the country, including The Ryder Cup and Commonwealth Games in 2014, World Gymnastics Championships 2015, World Orienteering Championships 2015 the MTV Music Awards on two occasions and future events such as European Championships 2018, Solheim Cup 2019 and Euro 2020 Football.

Having been on the Commonwealth Games Scotland Board for four years as an independent non-executive Director, he was appointed Chairman in May 2015.

Paul was Chef De Mission for The 2006 Scottish Commonwealth Games team of 245 athletes and officials who secured a total of 29 medals. He was awarded an OBE in the 2007 Queen’s New Year Honours List for Services to Commonwealth Sport.

Paul Bush OBE is Chairman of Host City 2017, the largest meeting of cities and sports, business and cultural events, which took place in Glasgow on 27-28 November.