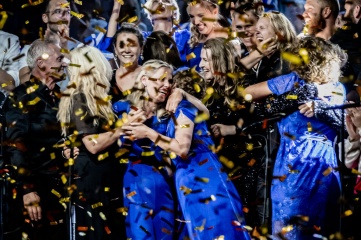 [Source: INTERKULTUR] From May 14-22, 2022, Calella and Barcelona, two of the most popular destinations on Spain's Costas de Barcelona, will once again be dedicated to choral music: With SING FOR GOLD and the final round for the World Choral Cup, INTERKULTUR presents a new event that will inspire choirs and from all over the world and their audience alike!

World Choral Cup along the lines of sporting competitions

SING FOR GOLD is an international choral competition where choirs will not only sing for medals and a place in the INTERKULTUR World Rankings – but where it gets really exciting in a final round: The best choirs from 10 different competition categories will once again compete in front of the jury and sing for the golden winner's trophy – the World Choral Cup, which will be awarded for the first time in 2022!

INTERKULTUR President Günter Titsch: "With this new event we are fulfilling the wish of many choirs to take home a World CUP of choral music for once, following the example of other sports competitions. The fact that we will come to Calella and Barcelona with this idea in 2022 is for us the crowning of our concept!"

Since 2012, the annual choir competition "Canta al mar - Festival Coral Internacional" in Calella had become one of INTERKULTUR's most popular choir events. Bringing a completely new format to the city for its 10th choir competition seems thus natural: "An exciting new competition awaits the international choir community in a place they got to know and love a long time ago, “says Günter Titsch.

Calella's mayor Montserrat Candini i Puig is pleased about the opportunities that this competition offers for the town: Calella is a city open to the world, open to tourism and open to culture. A welcoming city, that materializes all these values with events as important as Sing for Gold, reinforcing the city's commitment as a tourist destination, especially as a cultural tourist destination.”

Calella and Barcelona are popular destinations for choirs

Along with Calella, the popular metropolis of Barcelona will also be among the host cities for the competition. Both cities have been firmly in the repertoire of INTERKULTUR events for a decade now. Sunny weather, long sandy beaches, walking distances, as well as attractive cultural events and performance opportunities in Barcelona make this festival an unforgettable experience for all participants every year.

All information about SING FOR GOLD - The World Choral Cup is now available at www.interkultur.com/calella2022