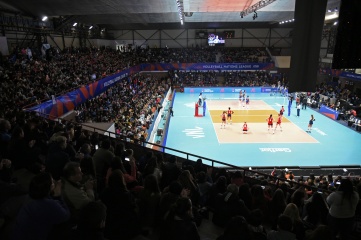 Luis Alexandre Rodrigues, the FIVB’s director for Asia and Oceania, talks to Host City about the federation’s plans to further develop the sport in the region

The international volleyball federation (FIVB) has made no secret of its ambitious global growth plans by targeting Asia. In recent months, FIVB president Ary Graça spoke about the untapped potential for indoor volleyball and beach volleyball in China and other parts of the continent.

The FIVB’s inaugural Volleyball Nations League is billed as “a pivotal moment” for the sport by Graça. He has said it’s “the most important competition in the FIVB’s history and will revolutionise how volleyball is presented; making it more fan-centric and placing our fans, both inside and outside the stadium, at the very heart of the action”.

A joint project between the FIVB, IMG and 21 national federations – the Volleyball Nations League concluded with the men’s finals in Lille and the women’s finals in Nanjing in July.

Luis Alexandre Rodrigues is driving forward the FIVB’s Asian growth plans from a newly-opened office in Beijing. Setting out the goals, he says the federation is keen to maintain “the momentum that the sport is going in with the Chinese team and of course with the world championships in Japan in September and October and to try to attract more partners interested in working with us”.

“We believe that the future is here that’s why it’s our first office outside Switzerland,” he explains. “We are here to learn with the region and by the time we get more experience for sure we will be holding hands with the other federations we have and promoters as well to deliver what we know best… good events.”

“We hopefully can engage much more with the region and do what we do in terms of delivering the best events possible,” said Rodrigues.

The Chinese government is investing huge amounts in sport, football in particular, but volleyball is also benefiting from more funding.

“When you see that volleyball is today the only collective sport in which China has such big results, like being world and Olympic champion on the women’s side, it’s something that the government for sure is foreseeing… and they will push as much as they can to make it even better,” Rodrigues said.

“And I think it’s the time to focus as well on the men’s side and make the team shine. They have a very, very strong, tall and good generation, they have hired an international coach and I think they have a good project for the future.”

Rodrigues said the growing profile of the Volleyball Nations League and finals in Nanjing are giving the sport momentum before the world championships spread around six Japanese host cities in September and October: “It’s occupied our time in Asia this year and we are very, very happy to do so. We see this as a good opportunity and we will do much more.”