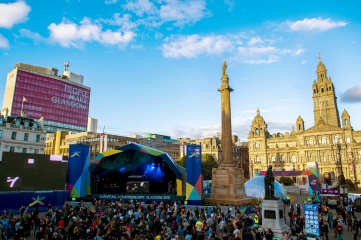 Paul Bush OBE, VisitScotland Director of Events, reflects on the successful delivery of the European Championships and how the new delivery model from the Championships is causing disruption in the market

Scotland’s reputation as a global leader for delivering world-class events is stronger than ever following the successful conclusion of the inaugural European Championships that saw the country deliver 11 days of sporting and cultural action with co-hosts Berlin.

For all involved, the European Championships has surpassed expectations and has shown what can be achieved when you are brave, ambitious and innovative.

As a new event there was no manual for how the Championships should be delivered, giving us the opportunity to be bold and find different ways of working; and while there were undoubtable some challenges as we navigated our way down this new path, overall the sector really responded by creating a new delivery model that is causing real disruption within the market.

I believe what has been delivered by co-hosts Glasgow and Berlin, in partnership with the European sports federations and the European Broadcast Union, is a model that is the way forward for sport events in the future.

With a potential total audience of more than 1.03 billion viewers across the continent, and an even wider audience via multiple digital platforms, the event was shown by more than 40 free-to-air broadcasters across 3000 hours.

Early international TV viewing figures across terrestrial channels were strong across Europe. In Germany and France, more than 3 million viewers tuned in on a single day (Sunday 5th August) to watch the action.

The quality of sport on offer also showed the calibre of the event. From Adam Peaty beating his own world record in the 100m breaststroke, to Grace Reid’s amazing final dive in the 3m springboard final to snatch gold from teammate Alicia Blagg, through to the emergency of new track stars in Dian Asher-Smith and Jakob Ingebrigtsen, the European Championships produced world-class performances across the board.

This shows that bringing existing individual events together, under one umbrella, and creating a mutually beneficial multi-sport event that is shown across multiple media platforms, you can achieve greater reach and impact than when done on their own.

Co-hosting the event with Berlin was also something very special and new. Co-hosting of events has rarely been done but again I think it is something we will see more and more of going forward. It is a great opportunity for cities and countries to come together and bid for events that otherwise might not have been possible on their own.

We’ve shown time and time again that Scotland’s events industry has the capacity and capability to deliver innovative events that offer a first-class experience for all involved. I’m proud of what we have delivered as an industry for the European Championships. This was an opportunity to build on the momentum we have created off the back of 2014 while being bold and trying something new. As an industry we have learnt a lot and can now take that forward in the delivery of and bidding for future events, ensuring Scotland continues to raise its game and maintain its reputation as the perfect stage for events.