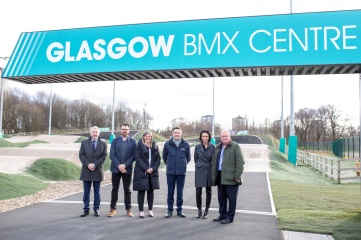 UCI President David Lappartient and Director General, Amina Lanaya, received a warm Scottish welcome during their two-day visit as they reviewed a number of venues for the 2023 UCI Cycling World Championships and met key partners and stakeholders associated with the delivery of the historic event

[Source: 2023 UCI Cycling World Championships] A senior delegation from cycling’s world governing body, the UCI, has visited Scotland to check in on plans to stage the world’s biggest cycling event in Glasgow and across the country in August 2023.

UCI President David Lappartient and Director General, Amina Lanaya, received a warm Scottish welcome during their two-day visit as they reviewed a number of venues for the 2023 UCI Cycling World Championships and met key partners and stakeholders associated with the delivery of the historic event.

The group visited the Glasgow BMX Centre in Knightswood, where fans will see the world’s best compete in high-speed sprint races across a purpose-built racetrack, while also taking in the city’s iconic George Square, which will provide a stunning backdrop for the road race finishes in August 2023.

David Lappartient, UCI President, said: “The inaugural UCI Cycling World Championships are less than 18 months away, and I am delighted to see the work that has been carried out so far to ensure the success of this historic event. The rainbow jersey battles will take place in spectacular venues in Glasgow and across Scotland, and it has been fantastic to visit some of the sites this week. Our discussions with the organisers have been positive and exciting, and we look forward to continuing our collaboration in the lead-up to this ground-breaking mega event for cycling.”

“We are proud the UCI has entrusted us to host the 2023 UCI Cycling World Championships and having David and Amina here to see and hear about our progress is a great milestone. Alongside our partners at Scottish Government, Glasgow City Council, British Cycling and UK Sport we are committed to delivering a Championships that will be truly ground-breaking for cycling.”

More than one million spectators are expected to attend the Championships, with a global TV audience of around one billion making it one of the Top 10 watched sporting events on the planet.

To date, five venues have been announced in Glasgow, with Dumfries & Galloway (para-cycling road) and Stirling (time trial) also hosting events across Scotland. Additional venues and locations elsewhere in the country will be confirmed in the coming weeks and months to ensure a pan-Scotland delivery and to capture the imagination of the entire country.

The 2023 UCI Cycling World Championships were confirmed for Glasgow and across Scotland as a result of significant previous experience hosting high-profile sporting events. Glasgow and Scotland have become a sporting hotspot by welcoming unforgettable competitions such as UEFA EURO 2020 matches, the 2014 Commonwealth Games, the multi-sport Glasgow 2018 European Championships as well as cultural events including the world-renowned Edinburgh Festivals.

Since the Glasgow 2014 Commonwealth Games, participation sessions at the Sir Chris Hoy Velodrome have experienced positive uptake and cycling numbers have risen across Scotland. It is hoped the 2023 UCI Cycling World Championships can continue the increase of pedal power in Scotland, inspiring the next generation of riders across a variety of cycling disciplines.

The 2023 UCI Cycling World Championships are being delivered in collaboration between the UCI, Scottish Government, Glasgow City Council, UK Sport, British Cycling, Glasgow Life and VisitScotland. The partnership aims to create a blueprint for future editions by ensuring the inaugural event is authentic, innovative and distinctive.

The UCI, cycling’s world governing body, currently stages annual World Championships in each of its disciplines across the year in different host cities around the world. The UCI Cycling World Championships will bring these championships together every four years, the year prior to the Olympics, starting with the inaugural event in 2023.

This historic and innovative event will welcome 2,600 elite cyclists, including para-cyclists, from more than 120 countries and crown over 190 UCI World Champions. It will be a must see, must attend, much watch event as all these cyclists vie for the iconic rainbow jersey.

The 2023 UCI Cycling World Championships is more than just an event. It will be a catalyst for behavioural change across Scotland by giving everyone the opportunity to experience the freedom riding a bike can bring to their lives. By working in collaboration with cycling and wider partners, it will amplify and unify existing work and activity across health, transport, tourism and participation.

The 2023 UCI Cycling World Championships will be delivered in collaboration between the UCI, Scottish Government, Glasgow City Council, UK Sport, British Cycling, Glasgow Life and VisitScotland with its EventScotland team through 2023 Cycling World Championships Ltd, with the partnership creating a blueprint for future editions by ensuring the inaugural event is authentic, innovative and distinctive. www.cyclingworldchamps.com

Founded on April 14, 1900, in Paris, France, the Union Cycliste Internationale (UCI) is the worldwide governing body for cycling. It develops and oversees cycling in all its forms and for all people: as a competitive sport, a healthy recreational activity, a means of transport, and also just for fun. The UCI manages and promotes the nine cycling disciplines of road, track, mountain bike, BMX Racing, BMX Freestyle, cyclo-cross, trials, indoor cycling and cycling esports. Five of these are featured on the Olympic Games programme (road, track, mountain bike, BMX Racing and BMX Freestyle), two in the Paralympic Games (road and track) and four in the Youth Olympic Games (road, mountain bike, BMX Racing and BMX Freestyle). For more information: www.uci.org

VisitScotland is Scotland’s national tourism organisation. Its core purpose is to maximise the economic benefit of tourism to Scotland. The organisation’s key objective is to contribute to Scotland Outlook 2030, the national tourism strategy ambition of pursuing a sustainable and responsible tourism agenda. This will be supported by five overarching strategies: Marketing, Events, Quality and Sustainability, Inclusive Tourism, International Engagement. Spending by tourists in Scotland generates around £12 billion of economic activity in the wider Scottish supply chain and contributes around £6 billion to Scottish GDP (in basic prices). For VisitScotland’s press releases go to http://www.visitscotland.org/media_centre.aspx, tourism statistics and frequently asked questions go to http://www.visitscotland.org/. Where possible, a Gaelic speaker will be made available for broadcast interviews on request (Far an tèid iarraidh, agus far am bheil sin nar comas, bruidhinnidh neach le Gàidhlig aig agallamh). For holiday information on Scotland go to www.visitscotland.com For information about business tourism in Scotland go to businessevents.visitscotland.com. Follow us on twitter: @visitscotnews

Glasgow Life is a charity working for the benefit of the people of Glasgow. We believe everyone deserves a great Glasgow life and we find innovative ways to make this happen across the city’s diverse communities.  Our programmes, experiences and events range from grassroots community activities to large-scale cultural, artistic and sporting events which present Glasgow on an international stage. Our work is designed to promote inclusion, happiness and health, as well as support the city’s visitor economy, in order to enhance Glasgow’s mental, physical and economic wellbeing. For more information on our work, see http://www.glasgowlife.org.uk

UK Sport’s Major Events Programme is projected to invest almost £40 million of National Lottery funding through to 2025 to support the bidding and staging of major events on home soil, as well as providing specialist support to organisers. Events are supported not only for their likely performance impact on British athletes, but also to maximise wider sporting, social, cultural, and economic benefits. In addition, UK Sport also invests major event funding on behalf of Government including £9m into the 2019 UCI World Road Cycling Championships and £15m into the 2021 Rugby League World Cup.

British Cycling is the national governing body for cycling as recognised by the UCI – the international federation for the sport. Based in Manchester at the National Cycling Centre, British Cycling works across all levels and six disciplines of the sport (BMX, Mountain Bike, Cyclo-cross, Road, Track and Cycle Speedway), from providing the support and encouragement people need to get riding their bikes for the first time, to being home to the hugely successful Great Britain Cycling Team. Continued success at the highest level is inspiring a boom in participation across the nation. There have never been more opportunities to ride a bike, be it for fun or sport, and British Cycling is at the heart of this growth. British Cycling also works hard to represent cyclists’ interests at all levels, including campaigning on important issues including road safety. As a membership organisation, British Cycling provides a suite of benefits and support to its members who currently number over 150,000. All membership revenue is invested back into cycling.