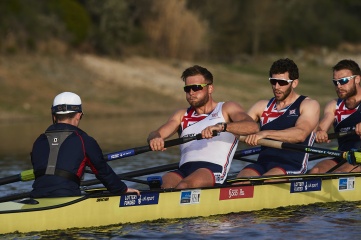 [Source: British Rowing] British Rowing is delighted to announce that analytics leader SAS will continue to provide its world-leading analytics solutions to British Rowing until December 2021 through the rearranged Olympic and Paralympic Games next summer.

Commenting on the extension of the partnership, Andy Parkinson, British Rowing CEO said: “In challenging times for the sport, it’s fantastic that SAS has agreed to continue its support beyond the Olympics and Paralympics next year. Through this partnership, we’ve been able to significantly accelerate our understanding of our data and build infrastructure that is now helping us make decisions and optimise our long-term strategy.”

Charles Senabulya, VP & Country Manager, SAS UK & Ireland, said: “We’re delighted to continue our support for British Rowing in what are extremely challenging times for all organisations. Coaches and athletes have had to adapt, just like businesses, to remote training away from the water and communicating virtually rather than face-to-face. On a positive note the postponement of the Olympics and Paralympics until next year at least gives British Rowing more time to use analytics to uncover important insights from performance data.

Through the partnership, SAS’ advanced analytics software and consultancy are being used across broad areas of the business including membership analysis, competition ranking algorithms (the SAS Ranking Points Index) and performance data analysis. In recent years, significant progress has been made in building data-led models of performance data, helping British Rowing better understand the precise factors that can influence and affect an individual’s performance.

Nick Scott, Head of Performance Support explained how the partnership is helping the GB Rowing Team: “Rowing is an incredibly data-rich sport, but just having lots of data does not mean you will automatically find the next competitive advantage. With this latest SAS project, we are using advanced analytics to link and interrogate never before combined data sources to do two things - confirm what has made us successful in the past and find novel ways of optimising our training for the future.”