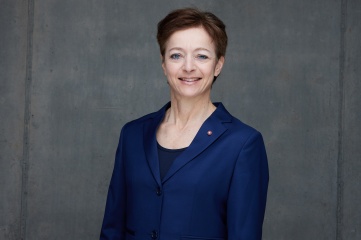 The official candidacy nomination has been submitted to FIS by the Royal Belgian Ski Federation, of which she is a member.

The candidacy could ultimately make her the fifth – and first female – President in the 97-year history of FIS, founded in 1924 and whose disciplines now represent over half of the Beijing 2022 Olympic Winter Games programme.

Lewis is pledging to transform FIS into a global movement for world skiing and snowboarding as part of her FIS Piste Map - the blueprint for the future of the organisation.

She will further integrate the 135-member ski and snow sport National Associations and the athletes into the governance, drive a digital transformation to strengthen commercial potential and introduce crucial governance reforms to future-proof FIS.

She is also pledging to implement a Covid Recovery Fund for National Associations, renounce a presidential salary and introduce financial efficiencies notably in these unprecedented times. Boosting gender diversity, athlete, youth and emerging member nations initiatives, strengthening the all-important symbiotic relationship between ski, snow sport and tourism, and focusing on sustainability, the environment and legacies for the mountain regions hosting global events are also important priorities.

FIS, whose current President Gian-Franco Kasper stands down after 23 years, will see its first contested and virtual election in its history, on 4 June 2021.

Lewis was Secretary General of FIS for twenty years until last October, when her departure was announced – she is now running for President in this “new era” of FIS.

She had always stated that she would not declare a candidacy to run as President before the conclusion of the FIS World Cup and Championship season, to maintain complete focus on the sport and athletes.

“We are entering a new era for FIS and global sport - an era that requires FIS to tackle its role in a changed, more inclusive and demanding society, and an era that FIS must embrace for growth, a healthy future for our sport, with our athletes at the centre,” she said.

“We have been presented with a unique opportunity - to elect a 21st Century President, whose full focus is to work hand-in-hand with the National Associations and stakeholders, leading FIS on a strategic transformation to become a global movement for world skiing and snowboarding.

“I have devoted myself to our sport as an Olympian, to FIS and our community, and to the Olympic Movement as a participant, manager and a leader.

“I am now making this journey for one reason - to work together to build a FIS that is fully representative of the global ski and snow sport community, and fully equipped to take us well into the second centennial of FIS, with a crystal clear plan, transparency and accountability. Together I believe we can achieve much more.”

Lewis, who put on skis aged five, has spent her life in snow sport. By the age of 15 she was training internationally, becoming a ‘citizen of the world’, and at 24 she represented Great Britain at the 1988 Olympic Winter Games in Calgary.

In 2000, after two years as FIS Director, she was appointed Secretary General.

She has made it her mission to understand the global landscape and has actively participated in competitions and events in 59 member nations over the years, while taking every opportunity to promote FIS and snow sport as a member of the International Olympic Committee Programme Commission, sitting on three Olympic Winter Coordination Commissions and two Youth Olympic Games Commissions, and working at five Olympic Winter Games.

Lewis has also served as Secretary General of the Association of International Olympic Winter Sports Federations (AIOWF) and Chair of the World Anti-Doping Agency Independent Observers at the Beijing 2008 Olympic Games.

In 2018, she was awarded the title of Officer of the Order of the British Empire (OBE) for her services to sport.

The International Ski Federation (Fédération Internationale de Ski) is responsible for the Olympic disciplines of alpine skiing, cross-country skiing, ski jumping, Nordic combined, freestyle skiing and snowboarding, and is headquartered in Oberhofen, Switzerland, in close proximity to some of the world’s most famous snow sport destinations.