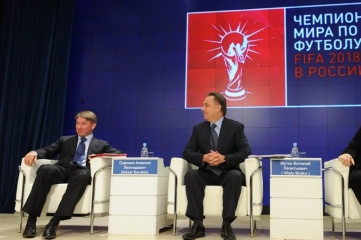 HOST CITY: How are preparations going in terms of the stadiums?

Alexei Sorokin: We’re had two ready for some time, Kazan and Sochi, and of course now we have Moscow Spartak which opened officially and the end of August and then staged its first game shortly afterwards. In the beginning of 2016 the St Petersburg stadium will also be ready. The rest are in different phases of construction.

HOST CITY: Can you tell us about opportunities for international contractors?

Alexei Sorokin: Foreign expertise was used in the design preparations. In some instances there has been a lot of consultancy from companies like Populous (England) and gmp (Germany). There is not a single stadium without some kind of foreign element.

The way we went about choosing was by public tender put out by the specific region. Different companies are being used for different aspects of design, so maybe one company for security, another for usability and so on.

HOST CITY: What about venue sustainability? How will you ensure legacy use for such large venues?

Alexei Sorokin: We don’t think the stadiums are that large. If you consider the population of the country, they are not overwhelmingly large. In some cases they will have demountable tribunes, in others they will stay at 45,000 seats, but the level of interest in football is enough to fill them to 80 per cent if not 100 per cent all the time.

We have strong assurances from the regional authorities that the need for such stadiums is there. The interest in football is of course not equal everywhere you go but that’s normal. There will be no white elephants for sure.

We’ve taken a lot of advice and the stadiums will all be designed in such a way that they are marketable for events other than football. If you look at Kazan, for instance, it will host aquatics in 2016. Every design has taken this concept into account. But we deliberately picked cities where clubs are playing in our Premier League, or at least are close to doing so. Several clubs in Russia jump back and forth. We have picked cities where people really go to watch football.

HOST CITY: But are they cities that can also attract the kind of non-footballing commercial entities?

Alexei Sorokin: The short answer is absolutely. Why do I say that? Because all but two of our cities have a population in excess of one million. There is a major need for a certain level of social life. They need a venue where people can get together.

HOST CITY: What will make 2018 stand out from other World Cups?

Alexei Sorokin: We hope to show a new country and the transition we have made in the last two decades; and to show how diverse Russia really is. We may be united by the same language but the regions are very different.

We certainly hope we can attract people to other regions than just the host cities because they are no less interesting. Some regions are dominated by religious culture or very historic. It will certainly be a discovery.

HOST CITY: Russia’s latest mega event was Sochi, but there was a lot of negative media surrounding so-called “anti-gay” laws. How do plan to avoid such adverse publicity?

Alexei Sorokin:  I wouldn’t call it an anti-gay law. It’s a law against propaganda over homosexuality amongst children. I recommend to everyone to read the contents of the law and try to understand it before twisting its nature which is what many have largely done.

HOST CITY: Ever since you launched the bid, Russian football has been unable to eradicate racism. How harmful is this?

Alexei Sorokin:  I would acknowledge that we have certain incidents and outbreaks of racism but not a dominating tendency. Many other countries also have incidents. I’m not saying that as a justification because it’s bad wherever it happens.

Our position is very strong. It’s part of our communication strategy, but it is not an overwhelming part of what we are doing in terms of organising the World Cup. But don’t get me wrong: it’s a very important subject to us and we are in constant discussions with the Russian Football Union, coming up with certain measures. We must make it unpopular and indecent to be involved in something like this.

HOST CITY: What are the most important observations you took away from Brazil?

Alexei Sorokin: It mostly lies in the field of atmosphere. The biggest impression for me was the atmosphere they managed to generate. You can’t just manufacture that as an organiser. It has to be natural.

The passion for the game was one of the true sentiments we brought back. We’ll struggle to match that, but every World Cup is different. We’d be wrong to try and copy them. Sometimes copying can be valid in terms of certain organisational patterns but in terms of overall climate, it has to be very distinct from all others.

HOST CITY: Is travelling an issue for you like it was in Brazil?

Alexei Sorokin: I truly don’t think so. You only spend a maximum two hours travelling from Moscow to the farthest venue away. I don’t think it’s that bad.

HOST CITY: What about the scale of the budget which caused such a backlash in Brazil?

Alexei Sorokin: We need to discern between what is spent on development of the various regions and the budget that is spent towards the event itself. In terms of the World Cup, the event budget is within appropriate limits. All the rest of it is about infrastructural development programmes which would have been spent anyway.

I won’t comment on what happened in Brazil but maybe it wasn’t explained enough, which we will try to do. These are investments into the lives of people including things like bringing hospitals that are close to stadiums up to certain standard. The World Cup will use them for a month but the people will use them for years thereafter.

HOST CITY: Everybody knows how tense the relationship is between Russia and the rest of the world right now. What impact could this have on your security plans and the perception of 2018?

Alexei Sorokin: Political situations tend to change. I don’t think it has any impact on our security because it’s always been a priority anyway. The World Cup is perhaps one of the ways of changing certain perceptions. That’s partly why our country decided to go for this. We are occasionally victims of old perceptions. Remember Euro 2012? There were some pretty negative perceptions beforehand but it went off well. The same applied to the Sochi winter Olympics. I wouldn’t spend much time thinking about perceptions.

HOST CITY: Finally, you currently have politicians everywhere calling for sanctions – and even a World Cup boycott - because of the situation in Ukraine. What’s your reaction?

Alexei Sorokin: Honestly the last thing I would do is comment on private opinions. It does not impact our work. Various people may have their opinions about where the World Cup should take place but it’s their opinion. If we paid too much attention to this it would be hard to organise the tournament.

Our focus is the World Cup. It will remain that way for another four years. We don’t feel any threat. We are organising the tournament together with FIFA. We need to keep the principle that was declared many years ago, that sport should be beyond politics.