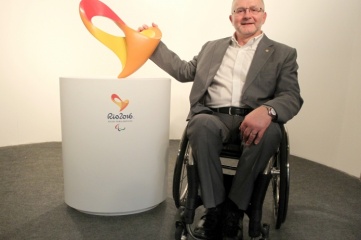 Sir Philip Craven, president of the International Paralympic Committee, is fully confident that Rio will host a spectacular Paralympic Games in 2016

2014 was full of questions about Rio’s readiness to host the Olympic and Paralympic Games but, according to International Paralympic Committee (IPC) president Sir Philip Craven, people can afford to relax in the knowledge that the city will deliver on time.

“1 January 2015 marks exactly 615 days to go until the Rio 2016 Paralympic Games and I can assure you that my excitement is growing by the day,” Sir Craven said in his annual New Year’s message.

“The Organising Committee has done a great deal of work in 2014, most recently highlighted by the successful launch of the Paralympic mascot Tom. I’m also delighted Rio 2016 has formed a Paralympic Integration Committee which is led by IPC Vice President Andrew Parsons.

“The last full year before the Paralympics is always vital and, in 2015, Rio will be staging a number of test events, as well as the Chef de Mission seminar, as their preparations gear up for the final push.

“People are a little more relaxed now they are seeing the venues grow in size each day and I am fully confident everything will be ready for our Games and that Rio will deliver a truly spectacular event. The atmosphere in Rio will be amazing; the Carioca like to party, and I hope Rio 2016 is one big party for the spectators and for the athletes (once they have competed of course!).”

Rio 2016 is of huge importance to the Paralympic movement.

“I believe the Games can be transformational not just for Rio and Brazil, but the whole of the Americas and the Paralympic Movement.”

Although 2015 is not a Paralympic year, the large number of qualifying championships taking place will make the year one of the IPC’s busiest ever.

“Arguably the biggest and most important sporting event of the year is August’s Toronto 2015 Parapan American Games which will feature 1,600 athletes from 28 countries competing in 15 sports,” said Sir Philip.

“It is vital that Toronto 2015 is a success and that we leverage the event to generate greater awareness of the Paralympic Movement in the Americas ahead of Rio 2016.”

In his address, Sir Philip also cited the Sochi 2014 Paralympic Winter Games as the IPC’s Top Moment of 2014.