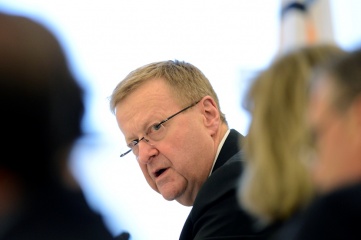 While the success of Rio 2016 hangs in the balance, no contingency plan has yet been drawn up to prepare for the worst case scenario

Preparations for the Rio 2016 Olympic and Paralympic Games are “the worst I have experienced” and “worse than Athens”, according to IOC Vice President John Coates.

“The situation is critical on the ground,” he said at an Olympic Forum in Sydney on Tuesday.

While the IOC is taking “unprecedented” action in an attempt to resolve “critical” construction delays, there is “no plan B” for the possibility of Rio not being ready to host the Games in 2016.

Coates has been involved in the Olympic movement for 20 years and has made six visits to Rio as a member of the IOC Coordination Commission, overseeing Rio’s preparations.

According to a statement from the Australian Olympic Committee, of which Coates is the president, IOC experts have been embedded in the organising committee, including construction project manager to ensure that works progress at the faster pace needed.

“The IOC has formed a special task force to try and speed up preparations,” said Coates.

The Rio 2016 organising committee has not responded directly to Coates’ comments, but it has said that it welcomes the intervention from the IOC.

“I’ve become very concerned, to be quite frank,” said Coates. “The last Coordination Commission visit earlier this month showed that they are really not ready in many, many ways.

“And then we followed that up with a meeting in Turkey two weeks ago when 18 of the federations said the organisers were not ready in respect of their venues, particularly in the case of the eight sports in the second Olympic Park at Deodoro. Really, construction hasn’t commenced there apart from a bit of ground clearance.”

Speaking on the BBC World Service on Tuesday night, Jefferson Puff, a BBC correspondent in Brazil said “If Deodoro was their only concern I think the IOC would be in heaven, because it’s so much more than that.

“The subway in the city was supposed to be extended, and that has been delayed. The bay in which some of the maritime competitions are supposed to take place is completely polluted. Critics say it will be very hard to clean it up in time.

“The budget for the Olympics is also a concern. You could argue that it’s basically a case of mismanagement of planning, of the money involved.”

“The challenges for sport leaders and team management is that they’re not getting answers to the questions when they go over,” said Coates.

“Can they use the car parks in the village for recovery centres? What will be the time to take from this venue to this venue? All of those things, they’re being fobbed off. No one is able to give answers at the moment.”

Despite the very real possibility that Rio might not be ready in time, there has been no mention of any other cities that might be ready to host if necessary.

“The IOC has adopted a more hands on role. It is unprecedented for the IOC but there is no plan B. We are going to Rio,” Coates said. “From my experience it’s the worst that I have experienced but we just have to make it happen and that’s the IOC’s approach.

“You can’t walk away from this. And if this comes off, the first Games in the South American continent in the magical city in so many ways it will be a wonderful experience for the athletes.”

Comparisons have been drawn between Rio’s Olympic projects and Brazil’s last minute rush to host the 2014 World Cup, which starts on 12 June.

“I think maybe the organisers of the Olympics are actually betting with destiny, betting with the future – hoping that they can accomplish the same,” said Puff. “Only for the critics, the delays for the Olympics are bigger than for the World Cup already, so one could argue that the game they are playing is quite risky.”