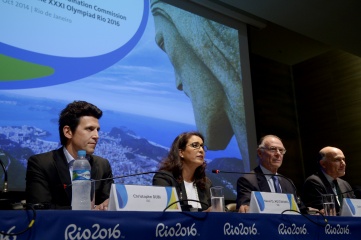 The IOC coordination commission was reassured to see faster progress and presidential support during its visit to Rio this week, but construction and accommodation remain a concern

In a marked contrast to its previous assessment, the IOC coordination commission has left Rio de Janeiro confident that Games preparations are back on track.

Over three days, the monitoring authority noted crucial improvements to venue works, public engagement and the support and coordination of the government. However, the timeframes for finishing construction and accommodation are particularly pressing, the commission observed.

“We leave Rio satisfied with the progress that has been made since our visit last March,” said Nawal El Moutawakel, chair of the commission. “We remain confident that, despite a very tight schedule, our Brazilian partners will deliver successful Games.”

The commission scrutinised the construction of venues and hotels particularly closely during the visit. “Although the schedule remains tight, the Rio team clearly demonstrated that they had the situation under control, with good progress being made,” the IOC said in a statement.

“Accommodation was always going to be a challenge with the large number of hotels that have to be built ahead of the Games, but very clear and reassuring information was provided to the Commission that the 68 new hotels under construction were on track.”

Moutawakel said “As we enter the final two years of preparations, we are able to see that the core works are progressing at full speed, particularly in venue construction, where we have been receiving solid development reports. We were also able to see first-hand the advancements being made, during our venue tour on Tuesday.”

“The strong commitment of the Brazilian authorities to the success of the Rio 2016 Games has been underlined to us by the presence of President Rousseff during our visit to the Olympic Park yesterday,” said Moutawakel.

Despite the country’s descent into recession this year, the coordination commission was told that a large part of Games and civic infrastructure projects are being financed by private funds.

"With the IOC's guidance and the help of our sponsors, we have the confidence we need,” said Carlos Nuzman, president of the Rio 2016 organising committee. “It is very rewarding when we look around and see our partners from the city, state and federal governments, building the Games with us."

The commission was also encouraged by marketing activities. “Rio 2016 has begun to engage in earnest with the public this winter and we were able to take stock of what has already been done,” said Moutawakel. “We were pleased to hear that this engagement will continue with upcoming events like ticket sign-up, mascot launch, the Cultural Olympiad and test events.”

The IOC statement described the test event schedule, which will feature more than 40 events in 2015 and early 2016, as “ambitious”, noting that the organising committee is “advancing full speed ahead towards these events”.