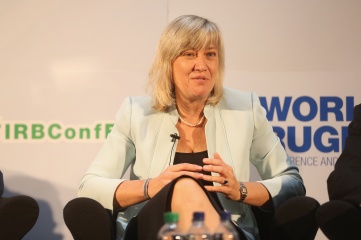 [Source: SportAccord Convention] SportAccord Convention confirms registration is open for the sixteenth edition of the Convention set to take place in Bangkok, Thailand from 15-20 April 2018. A city destination brimming with opportunities, #SAC2018 will be held at the five-star Centara Grand & Bangkok Convention Centre at CentralWorld, a world-class conference complex in the heart of the capital.

The Official Signing Ceremony for #SAC2018 took place in the Host City Bangkok on 31 May 2017 and was attended by the Deputy Prime Minister of Thailand, and the Minister of Tourism and Sports for Thailand, with well over 100 people in attendance from government, media and other organisations. Nis Hatt, Managing Director of SportAccord Convention said:

“SportAccord Convention is the biggest annual global gathering of the sporting community and is the only Convention worldwide with every International Federation present. Without doubt, the SportAccord Convention in Bangkok is going to present a myriad of opportunities for every organisation and delegate who attends. Hatt went on to say:

“The business of sport has grown enormously since the last Convention took place in the region and I would strongly recommend anyone who has a stake in sport, to take advantage of the unique networking opportunities SportAccord Convention offers and register for Bangkok.”

The multiplex venue provides a complete experience for delegates attending the Convention. Both the hotel and the convention centre connect seamlessly with CentralWorld, one of the largest lifestyle and shopping complexes in Southeast Asia. Organisations are encouraged to book their place early and take advantage of the early-bird rate of CHF1,500 (a discount of CHF1, 000 from the list price), available for a short period only.

The conference rooms and state-of-the-art exhibition hall offer outstanding facilities with natural day-lit rooms in a pillar-less environment. Exhibitor visibility will be second-to-none, and dedicated networking zones will help to showcase what organisations have to offer and how delegates connect.

The world’s premier annual event at the service of sport, SportAccord Convention is the place where sport meets whether it’s for International Federations, organising committees, cities and regions, marketing and sponsorship enterprises, legal teams, insurance companies, healthcare organisations, and many more. The Convention creates the occasion to build relationships, seed ideas and gain visibility on a world-stage, and many of these, play out as new business opportunities, or projects to further develop and support the sports movement.

As Deborah Jevans (CBE), former Tennis Player and the first woman to be appointed Director of Sport for both the Olympic and Paralympic Games (London 2012) told SportsPro during a podcast (08:05) at this year’s Convention in Aarhus, Denmark:

“SportAccord Convention is the place to be seen and is a really important event in the sporting calendar. The growth of sport has advanced as a business and is not just about the field of play. You don’t necessarily do a deal here but there is a lot of networking, a lot of conversations take place and relationships are created. Jevans went on to say, “Talking to companies during the Convention in Aarhus confirms this. SportAccord Convention provides the opportunity to meet any number of people from throughout the whole world.”

The Convention will include a 3-day exhibition as well as a full conference programme focused on sponsorship and marketing. Programme streams will include the Plenary, City Forum, LawAccord, MediaAccord and HealthAccord.  The Convention also offers numerous social events giving delegates the opportunity to network outside more formal settings, including the daily Exhibition Cocktails, Opening Ceremony and After Hours Bar, and its cultural programme will also take advantage of all that Bangkok has to offer.