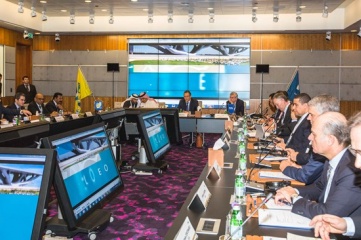 The task force will reconvene to finalize the international match calendar for 2018-2024, after the FIFA ExCo has confirmed the exact dates of the World Cup (Photo copyright: LOC)

A FIFA task force charged with identifying the least disruptive timeframe for hosting the 2022 World Cup finished its six month consultation process today with the recommendation that the event should take place at the end of the year.

The task force has identified end of November to the end of December as the most viable period to host the 2022 FIFA World Cup.

To minimise disruption to domestic leagues, the tournament will take place over a slightly shorter timeframe than usual, depending on the number of venues to be used.

According to unconfirmed reports, the tournament could run right up to Christmas with the final taking place on 23 December.

The dates are set to be confirmed at the next FIFA Executive Committee meeting in Zurich on 19 and 20 March 2015.

“The outcome of the discussions is also a proposed reduced competition days schedule with the exact dates to be defined in line with the match schedule and number of venues to be used for the 22nd edition of football’s flagship event,” said FIFA.

How many venues Qatar will use for the World Cup is still unknown. 12 venues were proposed in the bid; FIFA’s minimum requirement is eight but it would be difficult to shorten the timeframe of the tournament with so few venues.

Reducing the number of teams from 32 or matches from 64 has not been discussed.

Qatar’s bid for the World Cup was based on a summer tournament, but since being awarded the right to host the event it has become evident that the temperatures would be too high, even with advanced cooling technologies.

A FIFA statement also cited the 2022 Winter Olympics and Ramadan as immovable obstacles.

“Given that the two bidding cities for the 2022 Winter Olympics - Almaty (Kazakhstan) and Beijing (China PR) - pledged recently to host the winter games from 4 to 20 February 2022; that the month of Ramadan begins on 2 April in 2022; and that consistently hot conditions prevail from May to September in Qatar, the only remaining effective option is the November/December window,” said FIFA.

Postponing the event until early 2023 is not an option due to legal reasons, FIFA said.

FIFA says the proposal has the full support of all six confederations. However, European leagues have fought hard to avoid the competition taking place during their calendar.

England’s Premier League said in a statement: "The 2022 World Cup was bid for and awarded to Qatar as a summer tournament.

"The prospect of a winter World Cup is neither workable nor desirable for European domestic football."

FIFA said the task force took on board the considerations of everyone concerned.

“The analysis aimed to find the most viable solution for all stakeholders, covering the likely and possible impacts of conditions on players, staff and fans, as well as the knock-on effect for domestic leagues.

“The representatives of the leagues once again emphasised the impact that a November/December tournament would have on their respective calendars.

“The members deliberated over the various options to determine the least impact on the national and international football calendars.

Discussions are also underway about whether to move some of the qualification matches, with a final phase in early 2022 under consideration.

“We are very pleased that, after careful consideration of the various opinions and detailed discussions with all stakeholders, we have identified what we believe to be the best solution for the 2018-2024 international match calendar and football in general,” said Sheikh Salman Bin Ebrahim Al Khalifa, the chair of the FIFA task force.

“It was a challenging task and I want to thank all members of the football community for their productive input and constructiveness in helping to find a solution that we believe can work for everyone.”