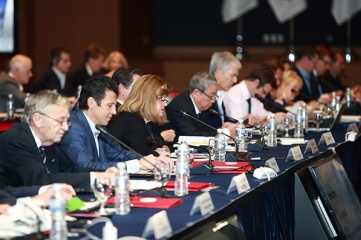 The IOC coordination commission is chaired by Gunilla Lindberg

As IOC’s Coordination Commission for the PyeongChang 2018 Winter Olympic Games concluded on Thursday, the International Ski Federation (FIS) secretary general Sarah Lewis told HOST CITY that progress is impressive, expressing confidence that venues will be ready in time for test events in 2016.

"The Alpine Skiing downhill course at Jeongsong and Freestyle and Snowboard cross and slopestyle courses are really starting to taking shape now and the progress with their construction over the past three months is impressive,” Sarah Lewis, FIS Secretary General told HOST CITY, speaking from PyeongChang.

“We're confident that the FIS World Cup competitions in February 2016 will prove to be an important milestone in the preparations for the Games and generate true excitement in PyeongChang and Korea when the world's best athletes are competing."

Sarah Lewis, who is also Secretary General of the Association of Winter Olympic International Federations, is to speak at HOST CITY 2015 on “The Changing Face of Sports Organisations”.

“The preparations for the Olympic Winter Games PyeongChang 2018 are developing well. Support from all the local partners continues to be strong, with the national and regional governments both present during our meetings. We were also delighted to have with us representatives of the seven International Federations on the 2018 programme, who brought their sport-specific expertise to the discussions.

“This was helpful for PyeongChang 2018, as it has now entered the delivery phase of preparations and is working on the detailed services for the athletes and technicians. This will be particularly important for the first sports events early next year, which include important dates on the international calendar, namely an FIS Alpine World Cup, an FIS Freestyle Skiing and Snowboard World Cup, and an IBSF/FIL pre-homologation event.”

She also stressed that PyeongChang 2018 Organising Committee (POCOG) must maintain its good progress as these test events loom.

“The venues continue to progress rapidly. We visited Jeongseon and the Alpensia Sliding Centre, and got a really good impression of what the athletes will experience come Games time. I am confident that they will be very pleased.

“The competition sites remain on schedule for the Games, but the organisers need to maintain their focus, as some delivery dates are very close to the start of the test events. It is important that PyeongChang 2018 delivers these events successfully and, in particular, the first events next February, in order to create a solid basis for its planning and preparations for the Games.

“This will also be a great opportunity for Koreans to experience elite winter sport and get engaged in the Games, as some of the world’s best athletes in those sports will be present in order to get a feeling for the 2018 Olympic venues.”

The next IOC Coordination Commission visit will be in March 2016.

PyeongChang 2018 Organising Committee President Yang-ho Cho said, “It has been a very productive three days. I feel that we are moving in the right direction to stage great Olympic and Paralympic Games.

“With the feedback and support of the Coordination Commission, we have made a number of important and critical decisions. As we move further ahead into the operational phase of the Games, I would like to thank the national and International Federations for their guidance and support. Their expertise and Games experience have been instrumental to guiding POCOG.”