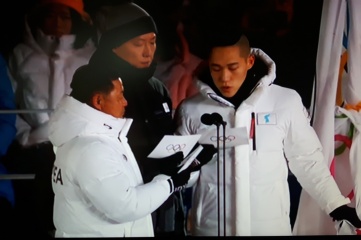 At the opening ceremony of the 2018 Winter Olympic Games in PyeongChang, the presidents of the organising committee and the International Olympic Committee joined in presenting Korea’s first Winter Games as bringer of peace.

Following the procession of athletes that culminated with the combined teams of Republic of Korea and the Democratic People’s Republic of Korea, Lee Hee-Beom, president of the PyeongChang Olympic Committee of the Olympic Games (POCOG) said the event “ushers in the Olympics Asia era”, pointing to the upcoming 2020 and 2022 Games in Tokyo and Beijing.

“Now we are facing the historic moments in our lifetime,” he said.

“Sport has a great power to unite people.

“PyeongChang will provide a light of hope for all citizens yearning for peace.”

He described the 2018 Games as “a festival of peace and harmony”, reminding athletes that it is “not the winning but the taking part; not the triumph but the struggle”.

IOC President Thomas Bach addressed the athletes by saying “You will inspire us all to live together in peace and harmony… You can only enjoy your Olympic performance if you respect the rules and stay clean.

“While you compete with each other, you live peacefully together in the Olympic village. In sport we are all equal.

“A great example of this unifying power is the joint march of the two teams of the republic of Korea and the Democratic People’s Republic of Korea. We all join and support you in your message of peace.”

“United in our diversity we are stronger than all the forces that want to divide us.

“Two years ago in Rio with the first Refugee Olympic Team, the IOC sent a powerful message of hope.

“Now we send a powerful message of peace to the world.”

The speeches were followed by a rendition of John Lennon’s Imagine featuring traditional Korean folk instruments.