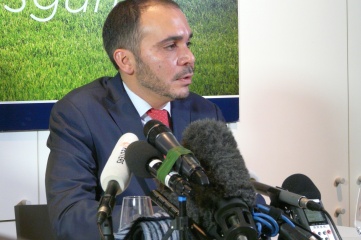 During a campaign trail of football associations around the world, HRH Prince Ali of Jordan took time to explain how and why he hopes to run football’s global governing body

Presidential candidate HRH Prince Ali Bin Al Hussein of Jordan produced his most vocal attack on the leadership of FIFA on Tuesday, setting out his stall to fix the tarnished reputation of football’s global governing body.

He spoke of a “culture of intimidation” within FIFA, where people can be punished for standing up for principles.

Challenging Sepp Blatter and the other two candidates, Michael van Praag and Luis Figo, to a public debate in the run up to the election, he said he hopes the presidential election will be conducted fairly.

Prince Ali plans to meet soon with van Praag, who he says he admires, and his friend Figo, to discuss strategy and said he would welcome the opportunity to work with them as a team.

He also said he will forsake his seat on FIFA’s Executive Committee if he does not win the election, as he is not prepared to work any longer under the current leadership.

Speaking in London to a select group of media including HOST CITY, he revealed the names of the five national football associations from three continents that have nominated him to stand.

“The countries are Belarus, Malta, England, Jordan, USA – and so I’ve very happy with that – and of course Georgia,” he said.

“These nominations are from three different confederations, which I am very happy with.”

It has been widely reported that FIFA’s continental confederations tend to vote as blocs, and that incumbent FIFA president Sepp Blatter has the support of five out of the six confederations.

However, Prince Ali downplayed the power of confederations in the election process. “This is not a question of confederations – this is a national association vote for the presidency of FIFA and I don’t think that any confederation is necessarily united in that respect.

“I don’t think anyone has a ‘stranglehold’ on any confederation; I think it’s up to member associations to decide.”

He also said the calls for reform are widespread. “I don’t think that it’s just in Europe that there are concerns about FIFA. I see that, having been in South America, in Asia and in Africa and I think it’s time now to make that change.”

A “culture of intimidation”

Addressing speculation that the leadership of the Asian Football Confederation, of which Jordan is a member, has not backed his bid, Prince Ali said “There is a culture of intimidation within FIFA but, having said that, this is a candidacy for the whole world.

“This is a world issue and not just about confederations.”

Pressed on what he meant by “intimidation”, he said “In the past if people take a principled stand, they end up being possibly punished for it.”

Observers have suggested that a strategy is underway to challenge Blatter via an early multi-pronged attack that could switch to supporting a single challenger.

However, Prince Ali welcomed the other candidates.

“It’s very good that there is more than one candidate and it’s also emblematic of people’s desire to have a positive future. I look forward to meeting with them as soon as possible.

“Luis Figo is a friend of mine, I know him very well. Michael can Praag is also somebody who I admire and respect a lot, so I would like to sit them down and have a good and honest discussion about how they see things.”

Asked about whether a joint candidacy might even be a possibility, he said: “That does not fall within our statutes, but I would be very welcome to have support and work as a team and with everybody for the future of football.

Building on a his core message of transparency, he said “I would like to see before the election a public debate, including the incumbent, so that everybody knows across the world what our positions are. I’m ready to do it.”

Widespread concern over allegations of corruption in the bidding process for the 2018 and 2022 World Cups has had a negative impact on FIFA, with a number of sponsors having dropped their support in recent months.

“There are many complaints obviously, in particular the reputation of FIFA and where it’s at right now,” he said.

“I am there to rebuild trust in our organisation and that doesn’t include only in our national associations but all stakeholders."

Asked about how this could be achieved, he said “FIFA needs to include everyone – including yourselves, members of the press.

“You need to have a long-term plan that does not change based on the whims of a president, and based on real decisions that are conducted with all stakeholders in the game – and fix our reputation. That’s the way I’ve always worked.”

Central to the challenges facing FIFA is the controversial way in which Qatar was awarded the 2022 World Cup. Asked if he would consider stripping a country of its hosting rights, he said “First of all I believe that every single association has the right to host the World Cup, regardless of their size and so on.

“Having said that, I was one of the first to ask for the Garcia report to be made public. Because this is a world game and everyone needs to understand what is going on – that is transparency in its essence.

“The problem really lies in how things took place: for example the double bid. We need to know why that happened. If Qatar had another four years to prepare their bid in a proper way, we wouldn’t be in this situation.”

Prince Ali was also drawn into pointing the finger directly at Sepp Blatter for the crisis of trust in FIFA.

“Blatter has been president and definitely the president needs to be held personally responsible for what happens; and if I am president I certainly will take responsibility for all actions at FIFA.

“I have a lot of respect for what he’s done in the past, but if we talk about proper reform I am not confident that I’ve seen it.

“He’s had the chance to do so; we’ve had Mark Peith’s report, which was never in my opinion shown. We’ve also had promises from him that he would not run again – but obviously that was not the case.

“In full honesty and integrity, he should give the chance to others such as myself.”

Prince Ali also announced his plans to leave the FIFA Executive Committee if he does not become president of FIFA.

“I have been on the Executive Committee for the last four years and I understand what has been going on,” he said.

“I have always tried to reform FIFA as best I can from the inside, but having said that I do believe the way to go ahead is to run for the presidency itself.”

“My total commitment is running for the presidency of FIFA. I’m not going to sit through another four years of what’s been going on and the only way to change it is from the top."

Despite his core message of a lack of transparency within FIFA’s administration, he remains hopeful that the election process can be conducted fairly and that he can win the election.

“I think I have my reputation, I am where I am and I just hope that things work out in that way, that it’s fair and it’s honest."

The presidents of FIFA's member associations will elect their president on May 29th.

“It’s long campaign, so I don’t think anyone should be written off. Globally there is a desire for change and I am committed to that.

“If things are played fair and rightly, things will grow in the appropriate way.”