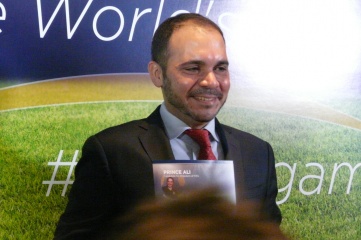 Prince Ali photographed at the launch of his campaign in February

Restoring FIFA’s reputation will lead to explosive commercial growth, says Prince Ali Bin Al Hussein in this edited transcript of his address to the UEFA Congress

I bring you greetings from my home country of Jordan; a land of peace; a country that serves as a bridge between cultures; and a mediator in times of conflict; a country that is at the crossroads of all continents and civilizations.

A country that believes in the pursuit of values, such as integrity, honesty and respect.

We are in a crucial time for football. Both inside and outside the football family, people have expressed concern about the way FIFA is run.

And there are some deep rooted issues that we as a family must unite to confront together.

Around the world there is a real appetite for change, new leadership, better support to National Associations, meaningful investment in football development, and for FIFA to be a genuine service organisation.

This movement calls for a better FIFA, one based on respect and dignity, admired by our stakeholders, and governed with a spirit of inclusion and transparency.

For the past 16 years as President of a developing FA I understand the many challenges associated with that job. I am also proud to have been elected as a FIFA Vice President for Asia and have always tried to bring the interests and needs of National Associations to the FIFA Executive Committee.

I envisage a FIFA that empowers its Member Associations, while always maintaining the highest standards of good governance.

We need a change of culture and a departure from FIFA’s authoritarian approach to strategy.

Strategic direction must come from the Confederations and Member Associations so that their interests become THE priority in the future.

FIFA, from a commercial perspective, has in many ways been riding the wave of European football’s success which has also helped directly the success of the FIFA World Cup.

And while the popularity of the World Cup has soared, the image of the organisation has sadly declined.

Imagine a rejuvenated FIFA, with its own reputation rebuilt and restored, coupled with the love of football, the only possible outcome will be explosive commercial growth far exceeding what we see now.

Ongoing and new commercial success coupled with the excess funds from our reserves can combine to create the right formula we need for FIFA’s development programmes.

The aim has to be to expand the game to new markets and territories, and give more countries a chance to produce new talent and achieve success at international level, both youth and senior level and in both men’s and women’s football. And allow Member Associations to aspire to host these events and receive the necessary support.

Many FAs around the world still do not have their basic needs met such as kits, pitches and infrastructure while others have a different pressure of reaching the knockout stages of the World Cup.

Whatever the case, the answer can only lie in harnessing the creative power and minds across FIFA’s Member Associations to give us the solutions to fit their specific needs, on a case by case basis.

And we need to expand financial support to the Member Associations because the more sustainable they are, the better it is for football and for FIFA.

I see a new era where development is a fundamental right of Member Associations… not a gift from FIFA.

There is also a human dimension here. I want to see new development partnerships in coaching, in governance and in player talent. I would like to see scholarship programmes to link coaches, officials and players around the world to benefit all our Member Associations.

I also believe that football has to use its power in the field of social responsibility to help the wider society and this is something very dear to my heart.

We must preserve the integrity of the competition, ensure that the highest standard of football is played at the game’s global flagship event and that neither format nor slots become subject to political whim and manoeuvring.

Too often we see FAs deliberately marginalised and played off against each other.

I am proud to be endorsed by Member Associations from three different Confederations. However, I would like to take this opportunity to thank the Members of UEFA who had the courage to grant me their support, Belarus, England, Georgia, and Malta.

FIFA should take great pride in what European football has given the world. You have set the highest standards in all that you do, both on and off the field, and the whole world watches, including my children, when the great dramas of European football play out.

Over the next two months it is essential that together we focus on the opportunity for real change and genuine reform.

This is a crossroads which could set FIFA on a new and positive path. That is the choice that the football family faces on May 29th.