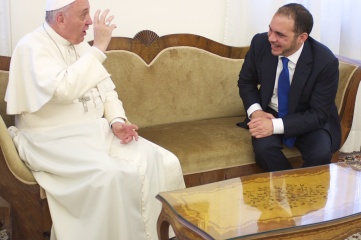 With just over a month to go before the FIFA presidential election, candidate HRH Prince Ali Bin Al Hussein met with His Holiness Pope Francis at The Vatican on Thursday to discuss the global development of football and how to promote peace and social responsibility through sport.

In the private meeting, Pope Francis and Prince Ali discussed the challenges and opportunities around developing football globally. They also talked about how sport and football can help to promote peace and social responsibility.

“I have been greatly inspired by Pope Francis’s work to use sport to build bridges between people of differing faiths and cultures,” said Prince Ali.

“Pope Francis is a true innovator in this regard; it was a great honour to meet with him not only in his capacity as the leader of one of the largest faiths in the world, but also in his capacity as a much-admired champion for peace, tolerance and inter-faith dialogue and understanding. Our discussions were very fruitful and we share a common vision of using sport as a force for good in the world.”

Pope Francis is a football lover and supporter of Buenos Aires-based team the Saints of San Lorenzo. Before the 2014 FIFA World Cup, he published a video message in which he described football as “a game and at the same time an opportunity for dialogue, understanding and reciprocal human enrichment”.

Last year, the Vatican hosted an interfaith charity football match to promote peace, in which he welcomed past and present greats of the football world for the high-profile game at the Vatican.

Prince Ali is said to be a direct descendant of the prophet Mohammed.

The development of football is a key concern of Prince Ali, who has been vice president of FIFA since 2011. In January 2012, he founded the Asian Football Development Project (AFDP), a non-profit youth commission headquartered in Amman, Jordan.

The AFDP works to develop football across Asia with a focus on youth development, empowering women, social responsibility and the protection and evolution of the game. AFDP led the successful campaign to lift the ban on head scarves in football.

Prince Ali has worked to promote unity and develop football since becoming President of the Jordan Football Association in 1999. In 2000, he founded the West Asian Football Federation (WAFF), of which he is president. WAFF’s members are Iran, Iraq, Jordan, Lebanon, Palestine, Syria, Qatar, United Arab Emirates, Yemen, Bahrain, Kuwait, Oman and Saudi Arabia.

The president of FIFA will be elected on May 29th.