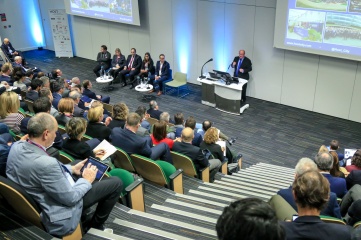 Opening the 2-day Host City 2018 conference, Paul Bush OBE, VisitScotland’s Director of Events, reflected on the busy year it has been for the global events and festivals sector as well as looking at the opportunities and challenges facing the industry going forward.

He said: “The last 12 months has seen a packed calendar of major events across the world, kicking off with the Winter Olympic and Paralympic Games, followed by the Gold Coast Commonwealth Games, the FIFA World Cup in Russia and most recently the Youth Olympic Games in Buenos Aires.

“It has also been pretty historic year for Scotland. We saw the opening of V&A Dundee, Scotland’s first ever dedicated design museum and the only other V&A museum anywhere in the world outside of London.

“We’ve also had our first themed year dedicated entirely to Scotland’s young people off the back of our bid to host the Youth Olympics that were recently held in Buenos Aires. As a legacy of that bid, and by putting our young people at the heart of Scottish society, the themed year has been one of the most successful things we’ve done.

“And one of the shining lights of the year was the inaugural European Championships with co-hosts Berlin. Those 11 days in Glasgow and Berlin were quite spectacular. There were many doubters and many doomsayers but it reached an estimated audience of 1.03 billion viewers and its success has created real momentum for the future that international federations need to look at.

“As a new event we didn’t have a manual on how the Championships should be delivered, giving us the opportunity to be innovative and find new ways of working. And while there were undoubtedly some challenges as we navigated our way down this new path with our co-host and the seven sports federations, overall the sector really responded, creating a delivery model that has caused real disruption within the events market.”

It is this delivery model that Paul believes we will see more of in the future.

“Already we’ve seen the 2026 FIFA World Cup awarded to the Unites States, Canada and Mexico as part of a joint bid and in 2020 the UEFA EURO 2020 will be hosted by 12 countries.

“In line with Agenda 2020, I think the International Olympic Committee need to be brave and give the Games to two or three countries. For me, it is the only way it will be sustainable in the future by spreading the benefit but also spreading and mitigating the risk.”

“Co-hosting across cities, regions or countries is an important trend for the future. It allows for more sustainable impact by using existing infrastructure as well as developing those social and cultural benefits across a much greater geographical area.

As well as new delivery models, technology was another area Paul believes will continue to have a big impact on major events in the future.

“Digital integration will also play a big part in the future of how major events are presented. We need to think how technology plays a part not only for the audience sitting in the stadium or concert hall but sitting at home whether that’s down the road from the venue or in a living room on the other side of the world.

“From augmented reality, live streaming to the availability of real-time data, all these tools are now at our fingertips to enhance the fan experience and drive greater engagement with an event.

“We’ve also seen the evolution of new events thanks to technology. The growth in esports and with it major live esport events, represents a massive opportunity for the sector. With an estimated 130 million competitive gamers who watch games online, and the huge growth market of esports, the alignment between traditional major events alongside an esport equivalent is massive.”

While it is an exciting time to be involved in the events and festivals industry, Paul strongly believes the sector still has more to do to ensure it articulates the short and long term legacy benefits if we are to continue to have meaningful impact.

“I know I said this at last year’s conference but I still believe we have a lot of work to do to truly showcase the impact hosting major events can have on a city and a country to our politicians.

“As an industry we can create impact across global governments like no other sector can. It is about ensuring a 360-degree holistic model approach to the planning and delivery of events, ensuring they are that are enshrined in policy whether its health, education, transport or sustainability. It is quite a change in mind-set moving forward.”

He said: “Their recent passing has come as a great shock to everyone. Over their careers they both made huge contributions towards the Olympic movement and they will be greatly missed.”

Host City is Europe’s largest meeting of cities and sports, business and cultural events, attracting a large number of senior representatives of cities and destinations from around the world, who are interested in sharing strategic and sustainable approaches to hosting the world’s greatest sports, cultural, business, science and entertainment events.