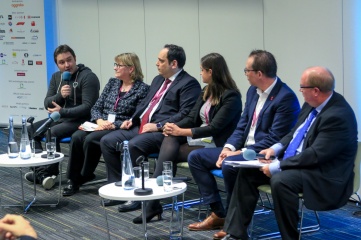 More organisers and owners of the greatest events in the world are joining the world class speaker line up of Host City 2019, the largest meeting of cities and sports, business and cultural events.

in addition to world leading experts and service providers:

They join a line-up of great speakers already announced including leaders of the Birmingham 2022 Commonwealth Games Organising Committee, Expo 2020 Dubai, several International Federations and event hosts, with more organising committees to be announced.

Host City is delivered with support from EventScotland, its primary Supporting Partner.

Host City Expo & Conference brings together cities and sports, business and cultural events for two full days of unrivalled insight, networking, workshops and business on 26-27 November at the Technology & Innovation Centre in Glasgow.

This is where representatives of host destinations, federations and other rights holders, organisers, event suppliers and services from all over the world meet to discover opportunities and discuss the challenges of major event hosting. Participants are encouraged to use Host City as a platform to develop, workshop and announce new events, partnerships and formats.

Host City is delivered with support from EventScotland, its primary Supporting Partner.