Home
»
News
»
Olympic overlay and procurement, from Rio to Tokyo 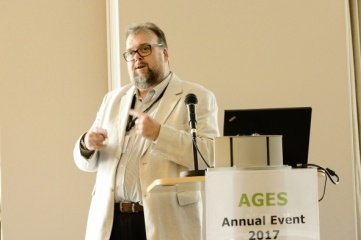 Senior figures at the IOC, Rio2016, TOCOG, Populous and MTD spoke with Daniel Cordey, Chairman of AGES about their experiences of overlay at the Olympic Games in Rio and outlook on the Tokyo Olympic Games

AGES shared with Host City some of the panellists’ comments.

Daniel Cordey: What were your personal ups and downs as the Director of Centralised Services, including the overlay for the Rio 2016 Games?

Paul Jouanneau: To summarise my feelings, I would say I felt:

Despair to have so much do to do and so little time and few people when joining the organiser. This resulted in a huge learning curve.

Fear of failure due to the quantity of crucial decisions to be done in a such a short time, while staying optimistic.

Proud of the achievements, even though there is still a way to go to finalise all deals because of the finance gap.

Daniel Cordey: How can you describe your experiences as the senior IOC advisor for the Rio 2016 Games, or in other terms, what were your major challenges?

Gilbert Felli: The experience from Rio was that altogether there was a low understanding about the requirements for temporary infrastructure for an event such as the Olympic Games. However, the bigger challenge was the fact that we never had a finalised responsibility matrix between the different partners for the delivery of this temporary infrastructure. Not only was this matrix not clear on every subject but, many times, agreements that had been reached between parties were completely reversed a few weeks later. This gave an uncertainty for the Organising Committee and the delivery partners on what they had to deliver and who would finance it. This delayed decisions and put both the organisers (OCOG) budget and the operation plans at risk.

Daniel Cordey: You mentioned that the constant transfer of responsibilities between the stakeholders affected the delivery of the infrastructure. Can you specify?

Paul Jouanneau: Sure, as example: by the end of 2014, City Hall required Rio2016 to assume the execution of International Broadcast Centre’s HVAC and Energy and Electrical power and outlets. This scope was never forecast and no team available. The tender process restarted from scratch to comply with Rio2016 Governance.

At a certain point Maracana and Copacabana Clusters overlays were to be supplied trough City Hall and federal government respectively. The decision took close to six months, was negative and implied in a huge delay in project and construction.

Gilbert Felli: Let me reassess that the IOC had always clearly stated, during the bid process or as soon as the Games were awarded, that venues with no legacies should be constructed in a temporary manner. However, this message was never clearly understood by all partners, both from the Olympic Family and the local organisers.

On the organisers’ side, there was always an optimistic view on possible future legacies of the venues. Agenda 2020 finally clarified the IOC position both within the Olympic Family and with the organisers. Following this clarification, the IOC will have to be more proactive in the future with assisting organisers in managing all the temporary infrastructure delivery process.

Daniel Cordey: You deplored the lack of inventory of certain overlay items and too little cooperation between the national and the international supply chain. What went wrong?

Paul Jouanneau: The cooperation between local and international supplier occurred but not on long-term perspective as it would be expected. Cooperation seemed to happened just by necessity. Somehow, the difficult economic and political situation contributed to that approach.

Hans Verhoeven: Local involvement is important to close international deals. The format for this can change per commodity supplier and per country. It can go from joint ventures with local companies or just supplying equipment to a local supplier or hiring a local representative and offer to set up a local company with local purchasing of equipment and hiring local employees. My experience is that the event supplier must always have a local component in their offer. The more local content in your offer, the more chance to close the deal.

Daniel Cordey: What would you wish the organiser to change or improve in the procurement process?

Hans Verhoeven: Procurement should start earlier (about two years ahead of the Games), the procurement process itself talking with the international event suppliers even earlier. Experienced overlay suppliers can provide valuable inputs to the Overlay team with workshops and other means. This helps them with the design and budget processes. Also, specialised suppliers can help the organiser with feasibility studies and value engineering. With clear and practice orientated information the procurement process and quality of tender documents can be improved. Another point would be to have contracts with a rate card to enable the process in closing early contracts at least one year in advance.

Daniel Cordey: You are often involved in the Venue Development and Planning process for Olympic Games. What do you focus on when consulting, or supervising local design companies, in particular when it comes to temporary infrastructure?

Jeff Keas: We get involved at different timelines in the life of a major event including the bid phase and after a city has won the rights to host a major event.  After a city has won, we work on both permanent facility design (masterplans, stadia, arenas, etc.) as well as temporary or overlay design. When working with an organising committee on the overlay design Populous looks at major events from what I would describe as a holistic approach – meaning strategy and program management, design, procurement, delivery/site management and operations.

The overlay design is a reflection on the operations.  The design should reflect the procurement and delivery strategy.  And the overall program management strategy will impact the overlay process.

Daniel Cordey: You visited Rio as the responsible of procurement of the next Olympic Games. What were your key learnings with respect to the procurement of overlays when visiting the Rio 2016 Games?

Masamitsu Isaka: I learned a lot from Rio2016. I have visited Rio and by visiting the actual place of the Games, I have gained a lot of information such as the scale for the Games and had the opportunities to contact global companies.

Firstly, I learned the importance of speed and timing. Specifically, it is important to evaluate and make decisions at an appropriate timing in order to prevent costs rising. For that purpose, I also learned that it is important to exchange information with enterprises who have experiences and knowledge, like AGES members.

The second one is the balance of price and quality. The third one is the difficulty of handling after Games.

It is difficult to procure a large scale of commodities, but I learned that dealing with them after the Games is also difficult. Thus, we need to think about after the Games at the time of procurement. For that purpose, we would like to rent and lease as much as possible.

Finally, I learned about the importance of the proper use of turnkey and commodity base, with regard to the procurement method.

In Japan there are few transactions with international suppliers in terms of overlay, thus we need to deepen mutual understanding.

Daniel Cordey: How do you expect the global event suppliers to prepare for the Tokyo 2020 Games?

Masamitsu Isaka: I believe that cooperation and input from global event suppliers with abundant experiences and knowledge is necessary for the success of the Games. Not only introducing past achievements, but to make suggestions on what AGES and its members can do for Tokyo 2020. Therefore, we invite you to deepen the understanding of our culture and customs and to offer competitive services, which we will truly need.