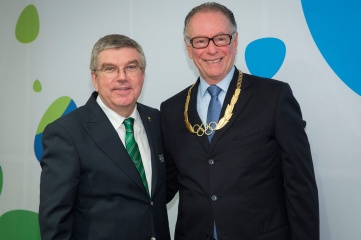 IOC President Thomas Bach and Carlos Nuzman, President of Rio 2016 and recipient of the Olympic Order

The light the Olympic Games casts on the host city can be harsh. Anyone who wasn’t already familiar with Rio’s issues with security, economics and the environment now has a much clearer picture. But such global attention is a good thing for the city in the long run, according to the International Olympic Committee.

“These Games did not take place in a bubble. We chose a city that has its problems, which has a reality with many challenges,” IOC President Thomas Bach told a press conference on 20 August, the penultimate day of the Games.

“The Rio 2016 Games took place within this context, which was positive as it allowed us to show that sport can help to address problems and bring people together. There are no regrets whatsoever,” he said.

Bach cited advances in sports, education and urban mobility as great benefits for the future of the city. Rio has a rejuvenated Port Area, a new Olympic Training Centre, a new leisure area in Deodoro, new BRT lines, a subway, a VLT, new roads, more hotels, and a City Operations Centre.

In recognition of these advances, he awarded the Olympic Order, the highest honour of the Olympic Movement, to Rio Mayor Eduardo Paes on 22 August.

The tourism industry could also continue to benefit from the Games. An estimated 500,000 overseas visitors came to Rio during the Olympic Games, 88 per cent of whom intend to come back to Brazil, according to a survey carried out by the ministry of tourism. To accommodate this influx, the number of hotel rooms has increased from 20,000 to 50,000, according to the Brazilian Hotel Industry Association.

However, preparations for the Games took place amid a backdrop of economic and political crisis and the city during Games-time presented a tough environment. The impact of Rio 2016's budgetary issues is now being felt by the International Paralympic Committee, which is facing the scenario of several national teams not being able participate as a result.

“Clearly Brazil is in a far different position now to the one that it was in October 2009 when it won the right to stage the Games,” IPC President Sir Philip Craven said on 19 August.

“The current economic and political climate has made preparations extremely challenging, especially for the Rio 2016 Organising Committee who we have partnered with for the last seven years.

“This situation is difficult for everyone involved and, on top of bringing in extra revenues and making cuts, we need to sell more tickets.”

But at the press conference, Bach was optimistic about attendance at the Paralympic Games. “At London 2012, ticket sales began slowly, but later picked up a lot. I hope the same will happen here.”