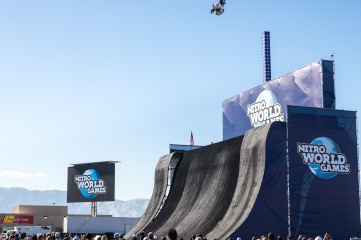 Global youth entertainment brand Nitro Circus first rose to prominence fifteen years ago thanks to the unbelievably outrageous stunts Travis Pastrana and team captured on film from their home studio. Originally intended for DVD and then for television, it was only a matter of time before Nitro Circus’ must-see content went viral as the internet developed into a multimedia platform. With Travis and friends pushing the limits in the name of fun and adventure, fans inspired by their jaw-dropping exploits quickly began to spread the word about these daring feats on the newly interconnected digital networks coming online at the time.

Then after the Nitro Circus live show debuted in 2010 the phenomenon exploded globally as fans could now post photos and videos of their heroes in person, sharing their first-hand experiences worldwide. Nitro Circus’ Facebook Followers soon numbered in the millions as the tour rolled on across Europe, North America, Asia, Australia and Africa. Currently over 20 million strong, this global community of engaged fans has established Nitro Circus as leaders in the digital space.

Now, as linear television rapidly converges with digital media, Nitro Circus is perfectly positioned at the forefront of this multiplatform, multiscreen future.

Nitro Circus took a bold step forward in this direction during the 2017 Nitro World Games: by innovatively pairing the live network TV broadcast of the action sports competition with a global Facebook livestream, fans everywhere could witness the game-changing world’s firsts on display from Salt Lake City’s Rice-Eccles Stadium, all in real time and on any device (Facebook had shown the event overseas the year prior, but this was the first time that the livestream was available worldwide).

Fast-forward to the present day, with Nitro World Games expanding and announcing new disciplines held in multiple locations across the planet, and this global reach only continues to grow. Highlights from the recent FMX Best Trick contest alone have gone viral on Facebook, exceeding over two million views to date. So far, Nitro World Games 2018 has generated over 10 million views across six live broadcasts of contests held in Utah and Southern California with more than 44 million impressions in total. Viewership truly spans the globe, with content translated into five different languages. Now, having just announced a partnership with the UK’s Scootfest freestyle scooter festival and with more details about other Nitro World Games events still to come, look for these figures to continue to grow exponentially over the course of the year.

Digital series such as “Off the Grid” and “Out and About with the Nitro Circus Crew” showcase the exciting adventures Nitro Circus athletes get into – everything from swimming with sharks in the waters outside South Africa to mountain biking through the badlands of Utah. Taking it a step further, by teaming with partners such as Whistle Sports and Junkin Media, Nitro Circus can maximize its extensive library and find new opportunities for growth and exposure.

From its inception, Nitro Circus has strived to break boundaries and redefine what is possible. With media consumption continuing to evolve, particularly among Millennials, look for the Nitro team to stay on the cutting edge by creating more groundbreaking events and engaging content.