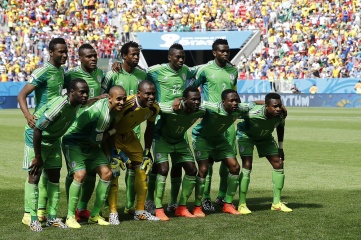 Nigeria is the reigning champion of the Cup of Nations

The status of the 2015 Africa Cup of Nations remains unclear following claims and counter-claims over Morocco’s hosting of the national team football tournament.

Reports yesterday (Thursday) that Morocco had withdrawn from hosting the competition due to fears over the Ebola crisis were denied by local authorities, who instead stated they remain keen on postponing the event, but retaining the hosting rights for a later date.

The Confederation of African Football (CAF), which is still to publicly comment on the matter, is now said to have approached Ghana and South Africa about hosting its showpiece event next year. Speaking at a press conference in Johannesburg today (Friday), South African Football Association (SAFA) president Danny Jordaan said his organisation had received a letter from CAF asking it to consider the potential hosting the tournament after African football’s governing body rejected Morocco's request to postpone the event.

In the event of Morocco formally withdrawing from the tournament, Jordaan said that SAFA would consult with the South African government over whether stepping in would be feasible. Meanwhile, Ghana’s Youth and Sports minister Mahama Ayariga confirmed his country had also been approached by CAF.

“CAF wrote to us and indicated that Morocco had given strong indications they would pull out if CAF did not change the date,” Ayariga told Ghanaian radio station Citi FM. “CAF also indicated that it was firm on the tournament dates, but they would meet the Moroccan authorities and take a decision at that meeting. But in the meantime they are writing to a number of countries that they think have the capacity to be an alternative venue... in the event of Morocco actually pulling out.”

Earlier this week, CAF insisted that the 2015 Cup of Nations would go ahead as planned despite a request from Morocco to postpone the event due to the deadly Ebola outbreak. The 2015 Cup of Nations is due to take place in Morocco from January 17 to February 8. However, Moroccan health officials fear the tournament could trigger a spread of the virus, which has claimed about 4,500 lives since its outbreak in West Africa at the beginning of the year.

Morocco’s Youth and Sports Minister Mohamed Ouzzine said on Thursday his country had not withdrawn as the host, but reiterated that the government would follow guidance from the World Health Organisation (WHO).

“Our concern is the health of Africa, and based on WHO reports and guidelines, we have to listen,” Ouzzine said, according to UK broadcaster the BBC. “Zero safety does not exist, but one has to take the necessary precautions so that the coming tournament will be a football feast, bringing together our African brothers, but given the current Ebola situation we don't think such a feast can take place as expected.

“We are talking about the Africa Cup of Nations where we are expecting between 200,000 to 400,000, even one million spectators to converge in Morocco. I don't think there is any state or any country that has the necessary capabilities to monitor, check and control the current Ebola situation when faced with these numbers. This is our real problem. We don't have a problem with visiting teams. We have a problem with visitors.”

South Africa hosted the previous edition of the competition in 2013, switching hosting rights with Libya due to the civil war in the latter country. Libya was due to host the 2017 tournament instead but recently withdrew its staging rights due to ongoing security concerns. Ghana last hosted the event in 2008.

Reports have claimed that any withdrawal by Morocco at this late stage could be met with severe sanctions from CAF. However, Ouzzine added: “If there are fears about the loss of funding and financial commitments, we can always find solutions to these issues – but today is not the day to discuss these things.

“We will discuss these things when we meet with CAF and we might even debate other options. But I beg you, what's the significance of the financial losses compared to human losses? A human being is priceless. I can tell you that we will reach a definite decision during our meeting with our brothers from CAF.”

Prior to the latest reports, CAF said that the situation will be addressed at its next Executive Committee meeting on November 2, stating that a further meeting will be held between the confederation and Moroccan officials in Rabat on the following day.