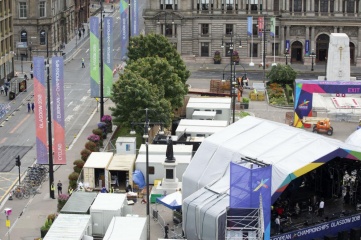 [Source: Glasgow 2018] A new era of sport has been ushered in as the first ever European Championships begins in Glasgow.

The European Championships are a major innovation in world sport as seven sports bring their existing events together under one banner for the first time.

The next 11 days will see world class athletes in Aquatics, Cycling, Gymnastics, Golf, Rowing and Triathlon competing in Glasgow and Scotland, while Berlin hosts the Athletics.

With 114,505 tickets now gone and with some sessions full, or with just a few tickets remaining, ticket buyers are being urged to hurry to secure the chance to see their favourite Olympic and Commonwealth stars crowned European champions.

Yesterday the unifying symbol of the Championships, the new Winning Nations Trophy, was revealed for the first time. Perfectly designed for teams to be able to lift and carry together in celebration, this will be awarded to the individual country which has secured the most gold medals at the end of the event.

Other firsts we’ll see in the next few days are:

Speaking at a press conference this morning, Championships Director Colin Hartley said: “This is the biggest event in the UK since Glasgow hosted the best ever Commonwealth Games in 2014.

“But it’s not just big, it’s truly innovative. By combining these seven sports we elevate the European champions we’ll see crowned in the next few days onto an even higher platform.

“With bigger crowds, a bigger TV audience and more opportunities for people to see their Olympic and Commonwealth heroes, today is the beginning of a new era for sport in Europe.

Jane Allen, Chief Executive of British Gymnastics said: “The 2015 World Championships were declared by FIG as the best ever and raised the bar for the sport so we’re really excited to be back in Glasgow.

“It’s fantastic that the same innovative venue layout and stunning presentation is being used again for the 2018 European Championships and I am sure it is going to be a fabulous week here both for our sport and for the British team.”

Jack Buckner, Chief Executive of British Swimming said: “We are delighted to be part of this outstanding new multi-sport European Championships and I would like to congratulate Glasgow on taking on this significant challenge to host such a ground breaking and complex event.

“We’re going to be using four incredible and unique venues across Scotland and I know they’ll be a great stage for the British Team to put in their best performances.

“This is an extremely important event for British Swimming as we build towards Tokyo 2020 and we have a large team of around 80 athletes here in Scotland across all four disciplines.”

Beth Tweddle Britain’s greatest ever female gymnast said: “It is fantastic to see another world-class event come back to Glasgow which has such a great track record for hosting big events. The World Championships in 2015 were incredible and the fans here in Glasgow are going to be in for another treat with an amazing action packed eight days of gymnastics at The SSE Hydro.”