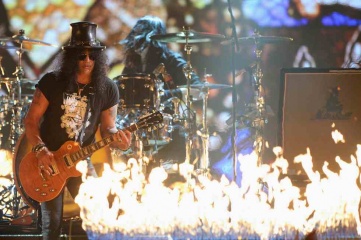 After a resoundingly successful MTV EMA in Glasgow, Europe’s biggest music awards ceremony is teaming up with the world’s biggest exhibition in Milan next year

The MTV Europe Music Awards (EMA) is to return to Milan next year, to coincide with the Expo 2015.

The news was announced by event host and rap sensation Nicki Minaj at the 2014 EMA at SSE Hydro in Glasgow on 9th November.

The 2015 edition of MTV's star-studded awards show will be held at the Mediolanum Forum in Milan on October 25.

Sunday night’s extravaganza was the first time Glasgow had hosted the event, culminating an extraordinary year of events in Glasgow and Scotland that included the Commonwealth Games and the Ryder Cup.

This will be the second time that the major international music awards event will be held in Milan, which played host in 1998, and the third time Italy has hosted the show.

“The 2004 show in Rome was a huge success. Now, we’re looking forward to delivering an even bigger and better experience with the 2015 MTV EMA in partnership with EXPO, bringing thousands of people from around the world to Milan.” said Raffaele Annecchino, Executive Vice President and Managing Director VIMN South Europe, Middle East & Africa.

“We’re thrilled to bring the 2015 MTV EMA to Milan – an iconic city where art, fashion and music collide, and home to the World Expo,” said Bruce Gillmer, Executive Producer of the MTV EMA and Executive Vice President of Music / Talent Programming and Events for event owner Viacom International Media Networks.

“One of the world’s biggest cultural capitals, Milan will undoubtedly set the stage one of the biggest global music events of the year," he added.

The World Expo is the world’s largest city-based event, after the Olympic Games. The theme of the Milan 2015 Expo is “Feeding the Planet, Energy for Life”.

According to Bob Bakish, president and chief executive of Viacom International Media Networks, the EMAs bring "a noticeable economic boost for the host city every year".

It has been estimated that Glasgow will have benefited by as much as £10m from hosting the MTV EMA.