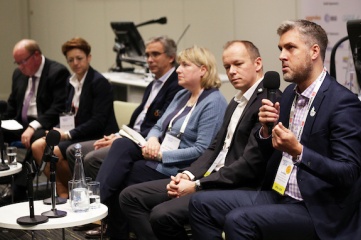 VIP speakers from the worlds of sport, business, and culture gathered at the sixth Host City Conference in Glasgow to deliver the message that innovation and working together will be key to the future success of the events industry.

Around 300 delegates heard high-profile figures, including David Lappartient, President of the Union Cycliste Internationale (UCI), Sir Craig Reedie GBE of the International Olympic Committee (IOC) and Ian Reid, CEO of the Birmingham 2022 Commonwealth Games Organising Committee, outline their vision around the theme “Innovate; Reformulate; Co-Create” on the first day of the conference.

In his keynote address, Paul Bush OBE, Director of Events at VisitScotland, spoke about the three topics that he felt had left their mark on the events landscape this year: the growth of women’s sport, contingency planning and audience engagement.

He said: “The Women’s World Cup in France had 1.12bn TV viewers with an average audience of 8.1m for the final. Megan Rapinoe, the USA star, shone a light on equal pay, equality and diversity issues in sport.

“Are the Tectonic plates of world sporting event shifting, colliding or being totally reshaped? In my humble opinion the answer to all three is ‘yes’.

“The events industry can and should take the lead on gender balance, LGBTQ, BAME and disabled representation to provide that platform for more people, from the field of play to the boardroom.”

Speaking on the opening panel of the conference, Dr Bridget McConnell CBE, chief executive of Glasgow Life, said that event planners need to keep working with and consulting with their local communities.

She said: “Our watchword has always been 'engage' and that underpins the whole approach in Glasgow. That is crucial to our future success. And that includes not only with event organisers, but also with decision-makers, influencers, politicians and our communities.

"It’s usually taxpayers’ money that pays for a lot that we deliver. So if they don’t see the relevance, embrace it, volunteer at events, or be inspired to take up sport then in times of increased pressure on spending of public funds there will be a big question mark over how relevant we can continue to be.”

Ian Reid echoed that sentiment as the organisers reach out to find out what their local community wants from a Commonwealth Games.

He said: “We are really focusing on youth as Birmingham is the youngest city in Europe. So our sports programme will have beach volleyball and three-on-three basketball, while we want to introduce city centre hubs that work around that with DJs and live site programmes to resonate with a demographic that perhaps hasn’t always engaged with the Commonwealth’s sports programme in the past.”

Sarah Lewis OBE, Secretary General of the International Ski Federation (FIS) and the Association of Winter Olympic International Federations (AIOWF) said: “From the context of co-creation in the six FIS ski and snowboard disciplines which are on the Olympic Winter Games programme, they have diverse characteristics and wide range of cities, resorts and venues. Co-creation and partnerships are different depending on locations. Some events take place in important capital cities.

“For example the next Winter Olympics is in Beijing. But we also have important events at small mountain resorts where there are more people organising them than live there. So the model can’t be one size fits all. You have to find different ways of working together to achieve successful events. That's the key.”

David Lappartient delivered insight into co-creating the 2023 UCI Cycling World Championships in Glasgow, the first to include all cycling disciplines competing together.

He said: “Having strong partnerships is fundamental. If you want to be a huge success everyone has to be on board. And we have been working together with Glasgow to really co-create this.

“Cycling has reacted well to this new vision. We have disciplines that are totally different. But all of them use a bicycle and they are proud to be part of the same event.”

Sir Craig Reedie GBE spoke about the London 2012 Olympic Games and the legacy that it left behind.

He said: “Figures produced six months ago showed that within the six boroughs surrounding the London Stadium since the end of the Olympic Games there have been 125,000 new jobs. I don’t know what the definition of legacy is but that’s pretty high in my book.”