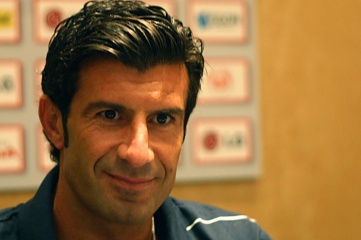 Luis Figo on Wednesday put himself forward as a candidate for the presidency of FIFA, promising to improve the organisation “deteriorating” image and remove its association with “scandal”.

Announcing his bid with just one day to go before the deadline, Figo joins Prince Ali of Jordan, Jerome Champagne and David Ginola as a challenger to FIFA president Sepp Blatter.

"I look at the reputation of Fifa right now and I don't like it. Football deserves better.

"In recent weeks, months, and even years, I have seen the image of Fifa deteriorate,” Figo told journalists.

"If you search FIFA on the internet, you see the first word that comes out: 'scandal.' Not positive words. It's that we have to change first and try to improve the image of FIFA. Football deserves much better than this.

"I've been talking with so many important people in football – players, managers, president of federations – and they all think that something has to be done.

The brand image of FIFA’s most valuable product, the World Cup, is at risk, Figo said.

“Last year was the World Cup, I was in Brazil and I saw the reaction of all the fans regarding the image of FIFA and I think something has to be changed.

"Change in leadership, governance, transparency and solidarity, so I think it's the moment for that."

All candidates will need to show the support of at least five nominating member associations in order to validate their presidential campaigns.

FIFA’s Harold Mayne-Nicholls, who led the evaluation commission for, and questioned the outcome of, the controversial 2018 and 2022 World Cup bidding procedure has said he may also enter the race.

The 42-year old footballing legend played for Barcelona, Real Madrid and Inter Milan, winning FIFA World Player of the Year award in 2001 and the Ballon d'Or in 2000.

FIFA requires presidential candidates to demonstrate that they have worked as “a board member, committee member, referee, assistant referee, coach, trainer [or] any other person responsible for technical, medical or administrative matters in FIFA, a Confederation, Association, League or Club”.

The president will be elected on 29th by FIFA members. Support for incumbent President Blatter is said to be very strong.