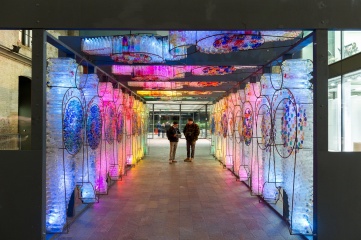 Litre of Light by Mick Stephenson at Lumiere London 2016, produced by Artichoke and supported by the Mayor of London (Photo: Will Eckersley)

London’s first Lumiere light festival closed on Sunday 17th January at 10.30pm, having transformed the city’s streets and buildings with 30 spectacular artworks. First estimates put the numbers of visitors at over 1 million attending the festival over four evenings.

Developed by creative producers Artichoke and supported by the Mayor of London, Lumiere London turned King’s Cross and London’s West End, including Leicester Square, Piccadilly, Regent Street, St James’s and Carnaby into a magical pedestrian playground and encouraged Londoners and tourists alike to explore the heart of the capital and view it in a new light.

“I am thrilled by the success of Lumiere London, which has brought a wonderful burst of imagination, colour and creativity to our city’s streets in the middle of cold, dark January. It could not have happened without the input and support of the many businesses and agencies who helped to make it happen,” said the Mayor of London Boris Johnson.

“We have been astounded by the crowds, which exceeded all our expectations and brought a boost to the West End and King’s Cross and are delighted by the response, not just from Londoners, but visitors from around the world.”

Lumiere was created by Artichoke in Durham in 2009, and has been recommissioned by Durham County Council every two years since then. In 2013, Artichoke also produced Lumiere in Derry~Londonderry UK City of Culture, commissioned by Culture Company 2013. In November 2015, the festival returned to Durham for the fourth time, attracting an estimated 200,000 visitors to the city.

“It’s been an unprecedented four nights for London and the turnout has been extraordinary,” said Helen Marriage, Director of Artichoke.

“Over a million people came to experience something truly magical and unusual: this great world city turned into a temporary pedestrian playground.

“While the success of the festival did mean that contingency measures had to be put into place occasionally to help keep the crowds moving, the atmosphere has always been amazing. This festival has been about more than seeing the art. It’s about people sharing public space and re-discovering the city’.”

Over 200 volunteers from across the capital were recruited to support the festival through Team London, the Mayor’s volunteering programme for London.

The festival is said to have brought a significant year-on-year uplift in food and beverage sales to businesses in London’s West End and King’s Cross, with anecdotal reports of double digit growth from restaurants, cafes and bars.

With founding support from Atom Bank, Bloomberg Philanthropies, Heart of London Business Alliance, London & Partners and King’s Cross, plus additional support from a host of partners and sponsors, including Westminster City Council, Lumiere London presented installations by 30 international artists, at some of the city’s most iconic locations.

The creative power of Lumiere was accompanied by a boost to business in the city. Karen Baines, Heart of London Business Alliance representing over 500 businesses and 100 property owners in Leicester Square, Piccadilly and St James's said “The atmosphere in Leicester Square, Piccadilly and St James’s has been absolutely electric with footfall increasing by 18% year on year on Thursday and Friday from 6pm to 11pm, as visitors flocked from far and wide to see our globally renowned cultural landmarks transformed.

“Our vibrant evening economy saw a significant boost with West End restaurants, cafes and bars reporting double digit growth in sales as visitors made the most of what was on offer to make it a night out and an evening to remember.”

How London came to life

Audiences from across the world were enthralled by artworks including a glowing tropical garden filled with giant plants in Leicester Square Gardens and a technicolour animation featuring the faces of some of the UK’s best-loved TV and film stars, projected onto BAFTA, 195 Piccadilly. At Oxford Circus, which was closed to traffic during the festival, people lay on their backs gazing up at 1.8 London, Janet Echelman’s beautifully illuminated aerial sculpture strung between buildings at Oxford Circus.

Along Regent Street, pedestrianised for the event, crowds gathered to see Elephantastic!, a 3D, larger-than-life projected elephant stomping through the Air Street arch, while in St James’s visitors gazed at the ethereal Les Voyageurs – sculpted human forms flying high above the buildings. At Westminster Abbey, audiences stood mesmerized by The Light of the Spirit, a digital painting by French artist Patrice Warrener, who had bathed the Abbey’s West Gate in an electric riot of colour.

In Carnaby, on Broadwick Street, visitors gathered around Julian Opie’s animated LED monolith – Shaida Walking. The piece has been commissioned as a permanent installation and will be illuminated during the day as well as at night.

Hundreds of Londoners of all ages played their part in the festival: from donating a recycled plastic bottle to the glowing Plastic Islands installation by Luzinterruptus in the Trafalgar Square fountains, to appearing on film in the spectacular Circus of Light projected onto the Granary Building at King’s Cross. 500 children also took part in workshops at schools in the area to help make Joining the Dots and Litre of Light, both also at King’s Cross.

Founding Partner Bloomberg Philanthropies and Artichoke also hosted a sold-out Lumiere London Symposium, “The Heart and Soul of the City”. Speakers including Lumiere London artists, cultural pioneers and leading policy makers, shared their visions for the public realm, and how artists and communities can transform it.