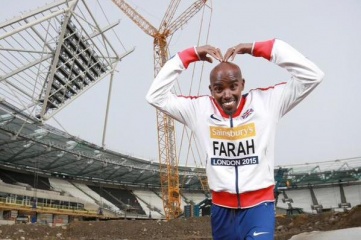 Mo Farah at the launch of the 2015 Sainsbury's Anniversary Games in the former Olympic Stadium (Photo: Mo Farah, via Twitter)

The Sainsbury’s Anniversary Games, which first took place a year after the 2012 Olympic Games, is to return to the former Olympic stadium in July 2015

The Sainsbury’s Anniversary Games is to return to London’s former Olympic Stadium from 24 to 26 July 2015, Mo Farah announced on Monday.

And from 2016, British Athletics will host a month of athletics in the stadium in an annual “festival” under a 50-year agreement.

The 2015 Sainsbury’s Anniversary Games will include a two-day Diamond League meeting on Friday 24 and Saturday 25 July, with the Sainsbury’s IPC Athletics Grand Prix Final taking place on Sunday 26 July.

Double Olympic 10,000m and 5,000m Champion Mo Farah returned to the former Olympic Stadium on Monday to launch the event, which is due to take place in the iconic venue at Queen Elizabeth Olympic Park.

“It’s fantastic that the Sainsbury’s Anniversary Games is planning to return to the former Olympic Stadium this summer and I can’t wait to get back on this track to compete, at what will be a stunning celebration of athletics,” Farah said.

“The atmosphere will be amazing and I’m sure it will bring back the memories of London 2012 and the inaugural Sainsbury’s Anniversary Games in 2013.

“I hope the British public will be as excited as I am about this event, and will come out to support the athletes. I’m sure it will be the best outdoor meet this year and a great send off to the World Championships.”

Tickets are due to go on sale at the end of April and demand is expected to be high. All 65,000 tickets for the 2013 anniversary Grand Prix athletics on 26 and 27 July sold out in just 75 minutes.

“Seeing the likes of Mo Farah return to the Olympic Stadium for the Sainsbury’s Anniversary Games will be one of this year’s monumental sporting events,” said Tara Hewitt, head of sponsorship at Sainsbury’s.

On 26 July, Paralympic stars from all over the world are to compete at the stadium and the London Aquatics Centre. The events will coincide with National Paralympic Day and the Mayor of London’s Liberty Festival.

“I am excited to announce that National Paralympic Day will be returning this year with elite sports competitions in both Swimming and Athletics, as well as lots of fun, family-friendly activity on the Park,” said Tim Hollingsworth, chief executive of the British Paralympic Association.

“Over 50,000 people have taken up the chance to come to the Park to be part National Paralympic Day over the past two years and relive the wonder of the London 2012 Paralympics.”

The stadium is currently closed as work continues to transform it into the new national competition centre for British Athletics in 2016 and the permanent home of West Ham United FC.

The stadium, designed by Populous, is currently being reconfigured from its Olympic Games mode to optimise it for hosting several events later this year including the Sainsbury's Anniversary Games and five Rugby World Cup matches.

Under an agreement with British Athletics, the stadium will host athletics competitions for one month of every year from 2016 for fifty years.

“For one month a year the Stadium will be the beating heart of athletics in this country and we want the nation to get excited about it and be part of it.

“As well as hosting the best international competitions in the world we need to create a two, three or four-week festival where that stadium is buzzing with athletics and fans every day.”