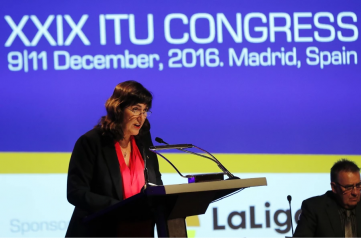 The president of the International Triathlon Union has been appointed to four IOC Commissions, including the Evaluation Commission for 2024 Olympic Games

[Source: ITU] The International Triathlon Union is pleased to announce that ITU President and International Olympic Committee member, Marisol Casado, has been appointed to four of the IOC Commissions. During the next year, Casado will serve on the Women and Sport, Olympic Solidarity, Public Affairs and Social Development Through Sport and Evaluation for the Games of the XXXIII Olympiad Commissions, while ITU Honorary Member Dr. Sarah Springman will serve on the IOC Sustainability and Legacy Commission.

“I am absolutely delighted to be involved in the four Commissions at the IOC,” said Casado. “To be able to present the IOC with the voice of an International Federation is always remarkable, and I commit myself to serve with dedication, transparency and loyalty to help develop not only our sport, triathlon, but also the whole world of sports.”

IOC President, Thomas Bach, announced the composition of the 26 IOC Commissions, highlighting the fact that 38% of the places are now held by women. “These changes are aligned with the implementation of Olympic Agenda 2020 and show that a stronger participation of women and a more diversified continental representation are our top priorities,” said IOC President Bach.

For the first time, female members are present on each of the Commissions. The IOC has also approved to increase the number of members from America, Africa and Asia, guaranteeing a more diverse continental representation.

Ms. Casado was appointed a member of the IOC in 2010, and since then she has been playing an active role on multiple commissions and activities. She joined the Women and Sport Commission in 2014, being also the only female president of a summer Olympic International Federation.

In 2015, she was appointed to the Public Affairs and Social Development through Sport Commission, presided by Mario Pescante, and the following year, in 2016, she was elected as a member of the Evaluation Commission for the Games of the XXXIII Olympiad, to which the cities of Los Angeles and Paris are bidding.

The last commission to be joined by Casado is the Olympic Solidarity, presided by the Sheik Ahmad Al-Fahad Al-Sabah, which is focused on giving assistance to all the National Olympic Committees, particularly those with the greatest needs, through multi-faceted programmes prioritizing athlete development, training of coaches and sports administrators, and promoting the Olympic values.

ITU Honorary member and former Vice President, Dr. Sarah Springman, has also been appointed to serve on the Sustainability and Legacy Commission, presided by Prince Albert II of Monaco.

The new make-up of the IOC Commissions, which will provide assistance to the IOC and the Olympic Games Organising Committees, is also marked by the inclusion of young men and women who represent a new generation and will be the sports leaders of tomorrow.

“I am really excited that some young faces are joining us working on the Commissions. Mentoring the new generations is always a great investment for all, as we’ve been doing during the last few years, also at ITU,” said Casado.