Home
»
News
»
Italian stars back Qatar to succeed in 2022 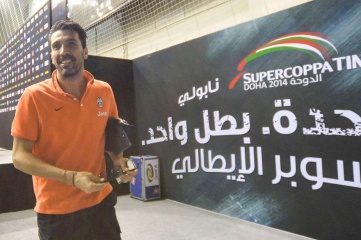 Gianluigi Buffon, captain of Juventus, hopes Qatar can bring out the romance in the World Cup (Photo: Juventus.com)

Since winning the right to host the World Cup in 2022, Qatar has faced intense scrutiny and scepticism – but Buffon, Maggio and Benitez say the host nation has got what it takes

Qatar has the economy and the infrastructural capability to host the FIFA World Cup, but needs to address the issue of the weather and impose its individuality to create an outstanding event in 2022, according to three of the biggest names in Italian football.

"The first feeling that Qatar gives is that this is a set of people who have everything. They have great potential to host an event of such high calibre," Gianluigi Buffon, captain of Juventus said at a press conference before the Supercoppa match between Napoli and Juventus in Doha on Saturday.

"Considering the economic potential and facilities here, the World Cup will be a positive event for this country. They have all the ingredients to make it a successful event."

Christian Maggio, the Napoli right back added "Since the first day of our arrival in Qatar we have been amazed by the infrastructure. It is beautiful. It is an indicator that this city wants to provide something extraordinary.

This is not the first time a major international footballer has backed Qatar to host a world class event in 2022. In May 2014, Yaya Toure of Ivory Coast was impressed by a presentation by the Supreme Committee for Delivery & Legacy.

Napoli coach Rafael Benitez, who has reportedly been offered a role coaching Qatar’s national team, said "Working with football people here in Qatar is a great pleasure. They have the best of facilities. And utilizing these facilities is something that Napoli and other teams should think about."

Buffon, who was for many years regarded as the best goalkeeper in the world, also spoke positively about the developing football culture in Qatar. "We were warmly received here. Many people, including myself, didn’t know that Juventus will have such a huge following in Qatar."

Speaking at a time when Qatar's right to host the World Cup is being called into question, he hinted that a non-judgemental attitude helps to build understanding. "If you don’t go about your life in a particular way then you don’t get the love of the people."

Nonetheless, the host nation still needs to work on its footballing identity and communicate its vision to the world.

"In the years ahead of the event, Qatar should find ways to make the event more romantic," said Buffon. "And I hope that it can be done and that will make the Qatar edition stand out from the rest of the world."

The biggest issue Qatar faces in hosting the World Cup is the hardest to control. "Of course I think that we need to play in the right weather so that the players can have the best conditions to display their skills. And also for the fans. They tend to move from one place to another. So we expect there will be the question of weather."