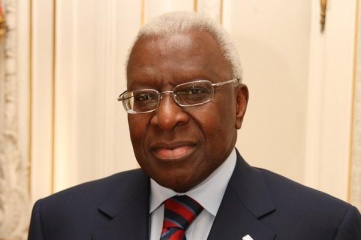 The IOC Executive Board on Tuesday suspended the honorary IOC membership of Lamine Diack, former president of the International Association of Athletics Federations (IAAF) following the publication of a World Anti-Doping Report on Monday.

“The Independent Commission’s Report contains a series of findings that will shock and appal athletes and sports fans worldwide, and indeed many issues that highlight very current deficiencies with the anti-doping system in Russia,” said WADA President and IOC Vice President Sir Craig Reedie on Monday, during Host City 2015 conference in Glasgow.

Following the publication of the report, the International Olympic Committee (IOC) said it was “closely monitoring the situation” and expects the IAAF and WADA to “consider all necessary action to be taken to protect the clean athletes and rebuild trust”.

The IOC’s Executive Board on Tuesday confirmed the proposal of the IOC Ethics Commission to provisionally suspend Mr. Lamine Diack, the former President of IAAF, from his honorary membership of the IOC.

In a statement, the IOC said it has asked the IAAF to initiate disciplinary procedures against all athletes, coaches and officials who have participated in the Olympic Games and are accused of doping in the report of the Independent Commission.

“With its zero-tolerance policy against doping, following the conclusion of this procedure, the IOC will take all the necessary measures and sanctions with regard to the withdrawal and reallocation of medals and as the case may be exclusion of coaches and officials from future Olympic Games,” the statement said.

The news follows WADA’s suspension of its accreditation of the Moscow Antidoping Center. The laboratory is now restricted from carrying out any WADA-related anti-doping activities including all analyses of urine and blood samples.

The IOC said it has no reason to question the credibility of the results of the anti-doping tests carried out at the Sochi 2014 Olympic Winter Games, but will retain all the doping samples for ten years and retest samples “in an appropriate way should substantial doubts arise. In any case, the IOC may retest samples once new scientific techniques become available”.

“While the contents of the Report are deeply disturbing, the investigation is hugely positive for the clean athlete as it contains significant recommendations for how WADA and its partners in the anti-doping community can, and must, take swift corrective action to ensure anti-doping programs of the highest order are in place across the board,” said Sir Craig Reedie.

“WADA is fully committed in its role of leading the charge to protect the rights of clean athletes worldwide.”