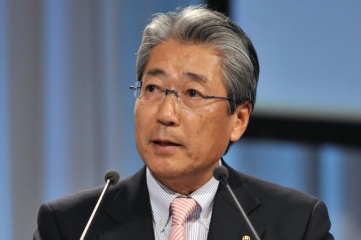 In an agreement through to 2024, The Bridgestone Corporation, headquartered in Tokyo, has joined The Olympic Partner (TOP) programme – the IOC’s small group of sponsors with exclusive marketing rights.

This is the first sponsorship agreement is the first to be signed under the watch of the IOC’s new marketing commission chairman, Tsunekazu Takeda.

“I am delighted that a leading Japanese company, Bridgestone, will become the 11th Worldwide TOP Partner and the second TOP Partner to commit through to 2024,” said, the IOC’s marketing commission chairman, who is also president of the Japanese Olympic Committee and vice president of the Tokyo 2020 Organising Committee.

“As the first Partner the IOC has signed under my Chairmanship of the Marketing Commission I am also personally very happy that we were able to make this global announcement in Tokyo,” said Takeda.

Alongside 10 other Worldwide TOP Partners including McDonalds, Coca Cola and Visa, Bridgestone will not only partner with the IOC but also all 204 National Olympic Committees and their Olympic teams.

The tyre manufacturer will also partner with the organisers of future Olympic Games, including the Rio 2016, PyeongChang 2018 and Tokyo 2020 Olympic Games, as well as the 2022 and 2024 Olympic Games – the host cities of which have yet to be elected.

Bridgestone will supply tyres and related services to support the transport operations at Games time, including the vehicles for the athletes, media and officials.

“The long-term, global support the TOP Programme provides is essential to the entire Olympic Movement, as well as to the staging and operations of each Games,” said Takeda.

As well as tyres, the product categories covered by the agreement include seismic isolation bearings and non-motorised bicycles. The company also manufactures industrial rubber and chemical products and sporting goods.

Bridgestone CEO and Chairman Masaaki Tsuya said, “As a global corporation, Bridgestone is excited to partner with the entire Olympic Movement, a group of organisations that not only brings together the world’s athletes at the greatest athletic festival, but also blends this celebration of sport with a spirit of service to community, social responsibility, a respect for diversity and a commitment to the fundamental principles of Olympism.”

As a Worldwide TOP Partner, Bridgestone will partner with the IOC and all 204 National Olympic Committees and their Olympic teams.

“The TOP programme is a truly global sponsorship programme, as it benefits all future Games organisers and all the National Olympic Committees and their athletes, ensuring that athletes from all over the world, and not just the largest countries, are able to compete at the Games,” said IOC President Thomas Bach.

“Indeed, the IOC redistributes over 90 per cent of its revenues to the wider sporting movement. Bridgestone is a global leader in its field, and we are delighted to welcome the company to the TOP programme and are excited about the long-term commitment they have shown to the Olympic Movement.”