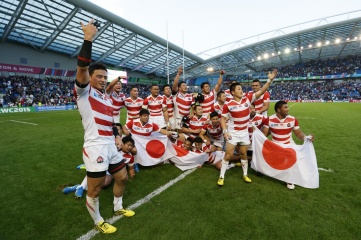 Japan impressed the rugby world with their performances on the pitch in 2015. Now they aim to do the same off the pitch when the country hosts the Rugby World Cup in 2019. Mike Starling reports for Host City

New Zealand’s mighty All Blacks may have walked away with the Webb Ellis Cup after beating Australia 34-17 in the final at Twickenham, but there’s no doubting which nation stole the limelight during the 2015 Rugby World Cup.

Japan sent shockwaves through the sporting world after a memorable 34-32 victory over South Africa in the Rugby World Cup Pool B encounter in Brighton.

Figures from the world of sport, the media and celebrities could not hide their excitement at Japan’s stunning performance on 19 September, 2015.

England’s World Cup-winning coach Sir Clive Woodward called it “the best game ever in World Cup history”. Japanese model and actress Risa Yoshiki tweeted: “And Japan won! I was transfixed from beginning to end! I can’t sleep now! Thank you to the Japanese players!”

Even J.K. Rowling, author of the Harry Potter books, was locked to her TV screen when the “Brave Blossoms” secured the famous last-gasp victory. She tweeted to her 10 million followers: “#RSAvJPN #RugbyWorldCup You couldn't write this...”

After the 2015 tournament finished, Brett Gosper, the managing director of Rugby World Cup Limited, said: “Possibly the greatest story of 2015 has been the success of the Japanese team. The Japan-South Africa game, I’m sure they’ll make Hollywood films of that one day as they did with Miracle on Ice.

“This has been the most competitive World Cup ever and I think the performance of the Japanese inspired all the other tier two teams so we had the smallest winning margins in World Cup history.

“I’m sure 2019 will break records in some areas but it will be ground-breaking. It will look very different, feel very different and will sound different to any World Cup we have ever had.”

Japan’s victory over the Springboks was one of the most epic finishes in sport, let alone rugby, and it firmly placed Japan on the rugby map. Some might say it was fate, considering their destiny in taking over the Rugby World Cup hosting baton from England.

From Brighton to Yokohama

Two years on from that result in Brighton, Japan is busy preparing to host the Rugby World Cup in 2019 (RWC2019). Starting with the opening game at Tokyo Stadium on 20 September and finishing with the final on 2 November 2019 at Yokohama Stadium, the 2019 Rugby World Cup will feature 20 nations, 12 stadiums, 48 matches and will welcome 400,000 international fans.

As Gosper said, it’s going to be a huge moment in Japan and Asia’s rugby history. Japan will be the first Asian nation to host a Rugby World Cup and the tournament comes 10 years since 2009 when the World Rugby Council voted to award the hosting rights to the Japanese Rugby Football Union (JRFU).

There still may be two years to go until the opening kick-off on September 20, 2019, but this year is a huge one for the RWC2019 organising committee and the JRFU.

So far this year the HSBC Kitakyushu Sevens, the first ever HSBC World Rugby Women’s Sevens Series round to be played in Japan, was hosted from April 22-23 and the draw for the RWC2019 pools took place in Kyoto on May 10.

Another major milestone in 2017 was in March when a World Rugby delegation held a week of meetings in Tokyo for its third official review of Rugby World Cup 2019 hosting preparations.

Topics of discussion and plans for 2017 included the pool draw, the launch of the IMPACT Beyond 2019 legacy programme, the selection of the team camps, finalisation of the match schedule, and the announcement of ticketing programme details.

Gosper, who led the World Rugby delegation in March, said: “This is an exciting and important year in the tournament’s lifecycle. Milestones in 2017 will lay the foundation for the successful delivery of RWC2019, including the pool draw, the match schedule announcement and launch of the ticketing programme – these are all major moments that will bring the tournament to life for the teams and fans around the world.

“With an accessible ticketing programme set to be announced later this year, it is important that our friends at the Japan Rugby 2019 organising committee continue to ignite excitement throughout the host cities, who will be central to inspiring people to be a part of a once-in-a-lifetime event that has fan-experience at its core.”

Akira Shimazu, CEO of the 2019 Rugby World Cup organising committee, said: “Hosting this first tournament review meeting of 2017 marks an important phase as we begin to move from planning to delivery. The meetings were detailed, constructive and provided us with an opportunity to outline progress and be guided by World Rugby’s knowledge.

“We are doing our best to deliver a ground-breaking tournament for teams and fans in partnership with our colleagues in the host cities and the Japanese government, who fully support us.”

From the Sapporo Dome in the north to the Oita Stadium in the south, some venues chosen for the 2019 Rugby World Cup were previously used when Japan co-hosted the 2002 FIFA World Cup.

“Match venues are being refitted to be suitable for RWC performance,” a spokesperson from the organising committee told Host City. “Some venues have previous experience as FIFA 2002 sites. Others are being renovated or being newly built for the purpose.

“As for the transport links, plans are being made from this fiscal year working with local governments. With regard to the accommodations, we have already secured the necessary capacity for the teams, guests and officials.”

Legacy plans for venues and host cities will also be confirmed later this year. “JRFU and host cities feature in the legacy plan of RWC2019 and they are in the planning process targeting late 2017,” added the spokesperson. “JRFU lead rugby development across the nation with particular focus on the cities and towns that provide a match venues and/or team bases. Twelve host cities aim at making a positive impact on the society in their own context.”

With rugby in Asia growing year on year, the Rugby World Cup organisers are optimistic that Japan 2019 can emulate the 2015 tournament held in England.

More than 400,000 international visitors are anticipated for the first Rugby World Cup to be held in Asia and strong demand is expected for the 48 matches in the 12 host venues.

For the 400,000 international rugby fans predicted to visit Japan, plans are in place for the creation of city activities, fan-zones and festivals throughout the tournament.

It’s not just international visitors though that Japan is hoping to attract to the 2019 tournament. With the 12 venues located throughout the length of the country it means that 75% of the Japanese population will live within one hour of a match venue.

According to the organising committee’s tournament vision the impact of hosting Japan’s biggest sporting event this decade will have a major impact for both rugby and the country’s economy. The 2019 nationwide festival of rugby activities will “further the reach and popularity of a sport that has seen an 11 million person increase in its fan-base since Rugby World Cup 2015” and the tournament is expected to deliver an estimated JP¥420 billion (US$3.82 billion) economic impact across the 12 host cities.

It’s also at the grassroots level where rugby is gearing up to grow across Asia. Launched in May by the JRFU, Asia Rugby and World Rugby, the “IMPACT Beyond” programme pledges to attract, inspire and retain one million new players across the world’s most populous region.

Despite already having 300 million fans and 8.5 million participants in Asia, the IMPACT Beyond programme will aim to make rugby accessible and inclusive to all across Asia and convert a new generation of rugby participants in the region.

Shimazu said: “Japan is preparing to welcome the world. We are committed to Rugby World Cup and we’re aiming to deliver the best yet. It will be a celebration of rugby and of Japanese culture as we will show off the best of our country and our hospitality on a global stage.”

World Rugby chairman Bill Beaumont added: “With 75 per cent of the population within an hour of a match venue or host city, everyone is welcome to be a part of what promises to be the biggest-ever festival of rugby in Asia and it is great to see so much interest from cities and prefectures as preparation accelerates within this big year for Rugby World Cup 2019.”

With big plans in place off the pitch in preparation for the 2019 spectacle, the JRFU will also be working hard to make sure the team again gets the results on the pitch when the action starts.

It’s going to take a lot of work to emulate the heroics of 2015, but the Brave Blossoms can take inspiration from the team they spectacular beat in Brighton, South Africa.

“A very inspiring movie called Invictus was made based on South Africa’s winning the 1995 World Cup,” said Shimazu, chief executive of the RWC 2019 organising committee. “Hopefully we can do similarly in 2019 to inspire Invictus II: the Japanese version.”