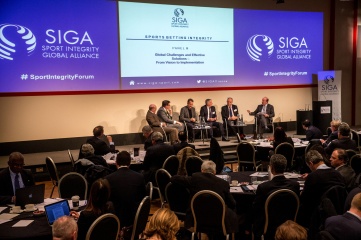 The Forum was held in the historic Chartered Accountants’ Hall – the headquarters of SIGA member, Institute of Chartered Accountants in England and Wales (ICAEW). Representatives from over 100 organisations from the international sports community attended, with high profile delegates from sport (international federations, clubs, leagues, national governing bodies and regional confederations), government, international and regional organisations, civil society and the commercial and professional services sectors.

Hansen began the high-profile Forum with a keynote address in which he described the corruption and doping scandals seen across a number of sports in recent years as “betrayals of sport’s values and of the trust of millions of people, young and old.”

He went on to highlight the significant progress that has been made both by the International Association of Athletics Federations (IAAF) and European Athletics in integrity and good governance. Hansen concluded: “I see SIGA as being from the sport movement and that it and European Athletics have common interests. Therefore, I want to wish you all the best with your project and I hope to work with you in the future.”

Hansen also took advantage of his address to reveal that he is asking that in future “we will store the doping control sample for any European record for a minimum of 10 years to allow for retesting when technology improves.”

The Forum’s three panel discussions on good governance in sport, financial integrity and sports betting integrity featured prominent and influential leaders from the world of sport, united in their belief that all of sport’s stakeholders should work in partnership to bring about real and lasting reform.

Speaking after the Forum, the SIGA Council said: “The first ever SIGA Sport Integrity Forum has been a great success and a significant step forward. We enjoyed three panels of very high quality with excellent interventions from the audience. But this Forum would not have been such a success without the contribution and efforts of everyone involved. SIGA as an organisation is completely reliant on the expertise and contribution of its members. We are built on the principles of collaboration and partnership as we recognise that real change is only possible if we work together.

“The panel discussions today highlighted the scale of the work that is ahead of us but they also reinforced the need for an organisation like SIGA to act as a bridge and bring together like-minded organisations from across the sports industry. SIGA is here to stay and we are committed to bringing about real change. Today we have shown that we can talk the talk but now we must walk the talk.”

The Forum was concluded by Chairman of the International Cricket Council Anti-Corruption Unit, Sir Ronnie Flanagan, and Caribbean Association of National Olympic Committees (CANOC) President Brian Lewis who expressed their support for SIGA and called on sports organisations to adopt SIGA’s Universal Standards.