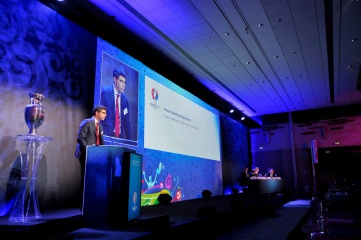 Stefano Manelli, Director at CITEC Ingénieurs Conseils and transport planner for UEFA EURO 2016, spoke with Host City about how millions of spectators were kept on the move in France

Host City: How pleased are you with how transport plans were delivered during the 2016 UEFA European Championship?

‎Stefano Manelli: The UEFA EURO 2016 was a real public transport success. The use of public transport to get to stadiums was even higher than during previous editions, with more than 60 per cent of spectators using public transport, even when the stadium was in the outskirts.

Trains (both regional and high speed) were used by 1.5 million spectators, of which many were international. These are very good figures that are testament to the work conducted over the last three years.

I am satisfied with the working relationships with the local and national authorities, which took more than two years to be fully established.

At the national level, we had a tight cooperation with the railway company SNCF, national partner of the event, in order to define a specific Euro railway time schedule: the efforts made were crucial to provide the necessary ease to the spectators’ flows moving between the host cities. A total of 950 TGV trains were identified as “Euro trains”, including special night TGVs after matches.

We need to put the UEFA EURO 2016 in the very challenging security context, which required increasing the level of attention around the venues, fan zones and stadium in particular. In this context, I am satisfied of the overall transport and mobility planning and operations.

The only regret was the fact that we could not implement, contrary to the past two editions, free transport for ticket holders (combi-ticket): it was not part of the original engagements of the bid and we could not achieve a uniform solution among the 10 host cities. In the end, all cities proposed individual solutions to spectators with a limited impact on operations.

Host City: Did any of the host cities pose particular challenges?

Stefano Manelli: UEFA EURO 2016 was the first 24-team European Tournament; this was the first considerable difference from the past. Ten instead of eight host cities were needed and 51 matches instead of 31, for 2.5 million spectators.

Even in a big European country like France, the level of equipment, size and experience in hosting events is not the same among all cities. Transport demand forecast was extremely challenging, for many reasons related to the size of the event. We observed less pressure on airports than in the past editions, probably as France is one of the most touristic countries in the world and offers multimodal transport opportunities.

The UEFA EURO is one event, even if it takes place in 10 different cities. The challenges were in the capability to deploy the necessary resources within each host city and to ensure a uniform approach to planning and delivering the “product”, the event. This required a very articulated coordination, which took some time to establish, but this worked very well along the whole preparation and tournament operations.

The amount of external stakeholders and private or public companies involved into the planning and operational phases was very important: in France, transport governance is decentralised and the organiser had to deal with each individually.

All activities aimed to provide a common working framework for each host city (tools, timelines etc.) and to oversee the development of transport plans and measures that were as uniform as possible, in respect of sustainability goals among others.

The support from the national authorities such as Ministry of Transport, Civil Aviation Authority and DIGES (the department of the ministry of sport in charge of integrating and activating ministerial activities around major sports events) was very important for the exchange of information and the dissemination to local level. For instance, as each participating team has an obligation to remain in the host country for the whole duration of its participation, various smaller airports around the country were impacted, where a need for additional air traffic and air safety and security conditions had to be met, requiring additional work.

Host City: What has the planning for the UEFA European Championships taught that will inform the work on Paris’ bid for the Olympic Games in 2024?

Stefano Manelli: It is certain that the UEFA EURO 2016 was a highly valuable experience and a great test both in terms of planning and operations. The good practices will be capitalised on, while the less good have already been analysed in order to improve in the future as a part of the debrief process.

France is a country with a very solid transport (and public transport) knowledge. Paris in particular has one of the first, most dense and developed public transport networks in the world. These are an excellent base already and the involvement of all relevant bodies into the process, is a very important element for the development of a robust transport plan.

Having said that, the two events are rather different and the solutions which can be implemented for a one-month multisport event in one big city are not comparable to those which could be afforded for a four to seven non-continuous days event in ten various sized cities.