Home
»
News
»
How to host the MTV EMA awards 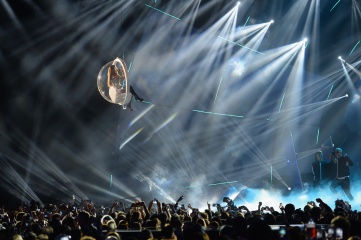 After a successful MTV EMAs in Glasgow, HOST CITY’s editor caught up with the show’s executive producer, Bruce Gillmer. Next stop, Milan!

Ben Avison: I was fortunate enough to be in Glasgow for the MTV EMAs – what a fantastic show!

Bruce Gillmer: It was a great show, we are very proud. The city was great too, it was a good partnership – it was a good one for sure, glad you were there.

Ben Avison: What qualities is Viacom looking for in a host city of the MTV EMAs?

Bruce Gillmer: First and foremost, we are attracted to cities that have rich musical heritage and robust music fans – that lights up the scoreboard for us. Cities that are interesting culturally are attractive.

Also a city that’s easy to travel in and out of from a variety of different cities around the world – easy to get to from the US and the UK, not too far off the beaten path.

Something that is of huge importance to us is the presence of a proper venue to stage the event.

Ben Avison: What are the main technical requirements of a venue to host the MTV EMAs?

Bruce Gillmer: The EMAs is quite a big event, so generally speaking we look for an arena that can hold approximately 10,000 fans and VIPs. We prefer a structure that’s on the newer side, maybe built in the last 10 years.

The Hydro this year was incredible. We got tremendous feedback from the artists, fans and VIPs. It was a comfortable environment with very good sightlines, no matter where you are sitting, for taking in the various different staging that we had around the venue.

And then there are all the other ancillary bits – a dressing room area that can support a red carpet pre-show and so on. The newer venues tend to be much more appropriate for an event of this scale.

Ben Avison: How can hosting the MTV EMAs benefit a city?

Bruce Gillmer: There’s the obvious economic boost that an event brings to a city, with several people travelling in from all around the world.

But really we think the value is in the amount of exposure on an international level that the event brings to the host city. There’s all of the pre-show marketing and promo and press, and then the broadcast of the EMAs itself reaches over 160 territories around the world – it’s a massive audience on every platform. In our minds that’s key – it’s the international exposure.

Also, the EMAs is synonymous with being super-relevant. A city that’s hosting the EMAs will be seen as a forward-looking, exciting location.

Ben Avison: What opportunities are there for cities outside Europe to host MTV events?

Bruce Gillmer: We host a variety of events around the world and we’ve got several award shows in addition to the EMAs, starting with the MAMAs, which is the Mother Africa Music Awards that takes place in Africa each year.

In the past it’s been in Lagos but most recently in Durban. The next host will be another exciting city in South Africa that will prove to be most advantageous from a staging production perspective. The other locations were extremely interesting from a cultural standpoint.

We have the VMAJs (Video Music Awards Japan) which is our awards show for MTV Japan, in Tokyo.

We also produce a variety of World Stage events around the world, which is not an awards per se – it’s basically a collection of artists, both international and local. It’s in Malaysia each year; we’ve been to quite a few cities around Mexico; we also host several events throughout Europe. We reach every major cluster of the world with our events.

It’s not just the obvious locations. We go for keen interest from a city or from a partner to go to a certain location, as long as it makes sense from a staging and production perspective and we can get what we need and we’ve got robust audience and excited music fans, then we’ll consider.

Ideas for events sometimes come to us from external partners or cities. In the case of the MAMAs, we staged an event also on South Africa a couple of years ago – the MTV Africa All Stars – where we had a vast array of artists from different genres from all over the continent – just. We also brought Snoop down, which was really cool and there was a lot of interaction between the artists.

So we’ve literally been to every corner of the world.

Ben Avison: How important are the EMAs to the MTV brand?

Bruce Gillmer: We do a vast array of events throughout the year; they are all important and they all serve a purpose and they all quite frankly support our brand and help us keep connected to the audience, which is vital.

The EMAs is really the crowning jewel and it really does personify the MTV brand. It’s always cutting edge; we hope that it’s always funny and fun and irreverent – all these characteristics are part of the DNA for the MTV brand. It’s really our opportunity to bring the brand to life in one glorious evening.

Ben Avison: The next MTV EMAs is in Milan, isn’t it?

Bruce Gillmer: Correct, we’re extremely excited about that. We announced that partnership as we were leaving Glasgow so really looking forward to that experience. The city of Milan really seems to be excited as well  and we look forward to it.

Ben Avison: Have you had much interaction with the World Expo people there?

Bruce Gillmer: Not a tremendous amount just yet but I assume as the weeks and months go on we will for sure, because we are tied in and meant to be the exclamation point to the Expo if you like. We always look to bring the fun with us.