Home
»
News
»
How Glastonbury Festival got greener with Aggreko 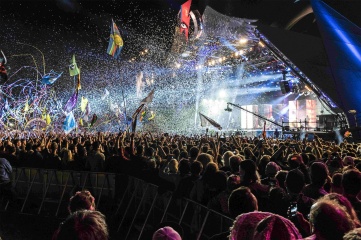 Aggreko renewed its contract with Glastonbury Festival in 2019, reducing emissions

Aggreko is proud to have been the exclusive power supplier for the festival since 2007, and in 2019 several locations at the festival were powered by hybrid thermal-solar generators, combined with battery storage systems and proprietary energy management software. This ensures maximum efficiency and minimise the carbon impact and together, these innovative systems saved over 200 metric tonnes of CO2 across the course of the festival, compared to the use of traditional diesel generators.

Uniquely, the festival’s Green Fields HQ ran entirely on solar power for the duration of the festival, which when combined with the battery storage systems, provided a reliable power source during the hours of festival operation.

In addition, this year saw the use of cleaner, healthier fuel deployed in Aggreko generators – Green D+, a special blend of Hydrotreated Vegetable Oil (HVO), purchased by Glastonbury directly. HVO fuel which is made to an international specification, is derived from a mix of 100 per cent used vegetable oils and waste fats. All carbon is removed in the production process resulting in a biofuel of higher consistency, quality and purity than other biofuels.

Green D+ includes additives that produce a fuel that has several advantages over standard diesel, including a significant reduction in particulates, over 80 per cent saving on greenhouse gases, zero sulphur emissions and reduced noise pollution.

By switching to this fuel, which works in all Aggreko diesel generators without modification, Aggreko achieved a C02 saving equivalent to the annual emissions of 45 family cars.

Bill Egan, a Principle Engineer at Aggreko Events Services who has a been working with Glastonbury Festival for over 25 years, said: “Powering a major event like Glastonbury presents a huge challenge. Providing 25MW of low-carbon power with the reliability to ensure that there are no disappointments for the festival-goers is no mean feat.

“Aggreko’s use of low carbon HVO fuel, combined with our innovative thermal, hybrid, storage and solar power solutions will ensure that everyone enjoys the festival without interruption, all the whilst supporting Glastonbury’s efforts to minimise its impact on the environment”.

The festival took place from 26th – 30th June. It is the largest greenfield festival in the world, attended by around 175,000 people. The five-day festival near Pilton, Somerset, is regarded as a major event in British culture and raises millions of pounds for good causes.