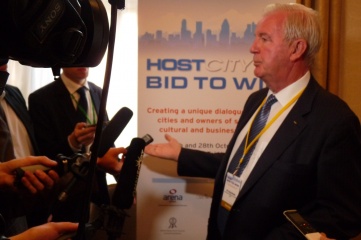 Attending HOST CITY 2015 in Glasgow on 9 and 10 November, which focuses on the theme of “Creative innovation”, will help cities to maximise the potential of a buoyant events market, according to IOC Vice President Craig Reedie CBE

Attending HOST CITY 2015 in Glasgow on 9th and 10th of November is an attractive opportunity for cities to get ahead in the competitive international market of hosting major events, according to keynote speaker Sir Craig Reedie, IOC Vice President.

“From my point of view of being involved in HOST CITY 2015, I am delighted that the event is coming to Glasgow, because Glasgow has shown that it is a sporting city with the way it has developed its facilities, the way it ran a major multi-sport event, the Commonwealth Games in 2014, and what it’s been doing since then – not least a couple of hugely successful Davis Cup tennis ties,” said Sir Craig Reedie.

“So if you look at the excitement that generates locally, and the promotion that it gives the city on a worldwide basis, then I think this indicates that the market out there is a buoyant one.

“Cities should be very well prepared to become involved and therefore they should be thinking ahead; they should be innovative – and with a bit of luck they will reap the benefits that Glasgow has.”

Under the theme of “Creative Innovation Connecting Cities with Sports, Business and Culture Events”, HOST CITY 2015 is an opportunity to meet, influence and network with a unique collection of city leaders and cross-sector rights holders and gain intelligence on the challenges and benefits of event bidding and hosting.

Sir Craig Reedie was deeply engaged in the IOC’s own “Olympic Agenda 2020” process of creative innovation, one of the primary aims of which was to make bidding for the Olympic Games more appealing to cities.

“We came up with a coordinated and sensible view of how we wanted to run the Games but also to promote the Olympic movement for the future.

“So therefore a process of change is a perfectly reasonable thing to undertake.”

More than 200 delegates have already confirmed their attendance at Host City 2015. Read the agenda and Register at www.bidtowin-hostcity.net to get involved and get ahead.