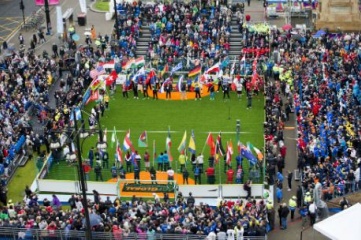 Football teams from all regions of the world have convened in Glasgow for the Homeless World Cup, which kicked off on Sunday 10 July. 100,000 spectators are expected to visit Glasgow during the week-long festival.
Teams from North America, South America, Europe, Africa, Asia, and Australasia arrived at Glasgow International Airport and were greeted with music and dancing at Glasgow Caledonian University (GCU), where they will be based during the tournament.
In a welcome video to participants, HRH, The Duke of Cambridge said: “The scale of homelessness across the world is staggering, with 100 million people defined as homeless, and a further 1.6 billion lacking adequate housing.
“The Homeless World Cup Foundation is taking a unique approach to this problem, using the universal language of football to tackle the issue.
“Each year, they bring together 52 teams from every continent to compete in a street football tournament, this year hosted by Glasgow.
“Every one of the 512 players in this tournament is homeless. They have each engaged with programmes run by the foundation to deal with some incredible personal challenges to make it here.
“This competition is a celebration of all that they have achieved so far, using football as a means to get back into a more stable life.
“For seven days in July, George Square in the heart of the city will be the most inspiring place on the planet.”
George Square in the city centre will host all 416 matches, which are free to attend.
The Homeless World Cup is organised through a three-way partnership between the Homeless World Cup Foundation, the Scottish Government (delivered via EventScotland), and Glasgow City Council (delivered via Glasgow Life).
“While the focus will rightly be on football thanks to a partnership between Glasgow Life and the Big Lottery, around 150 volunteers have been recruited for a variety of roles on and off the pitch,” said Councillor Archie Graham OBE, Depute Leader of Glasgow City Council and Chair of Glasgow Life.
“The legacy project will give the volunteers new skills and confidence though a post-games programme of sports coaching and creative writing.”
Welcoming the teams to Scotland, First Minister Nicola Sturgeon said: “The Homeless World Cup is a sporting event like no other. We know that sport has immense power to give people a purpose, to improve both physical and mental health and to boost people’s self-esteem.
“In bringing together competitors from over 50 countries, each with their own story of personal hardship that most of us will never have to tackle, the Homeless World Cup will energise and engage people who, for whatever reason, have become socially excluded.
“For the players, it’s an opportunity to develop resilience, achieve personal goals and help prevent repeat homelessness.
“And let’s not forget the chance to represent your country on the international stage is a huge honour that for many players, was only ever a distant dream. That’s why innovative initiatives such as the Homeless World Cup are so important, and why I’m looking forward to a spectacular and inspiring tournament."
Homeless World Cup president Mel Young said: “Make no mistake, this is going to be the most an inspiring event, a resounding success, made possible by players who have dreams, volunteers with heart, and a Scottish public with genuine spirit.”